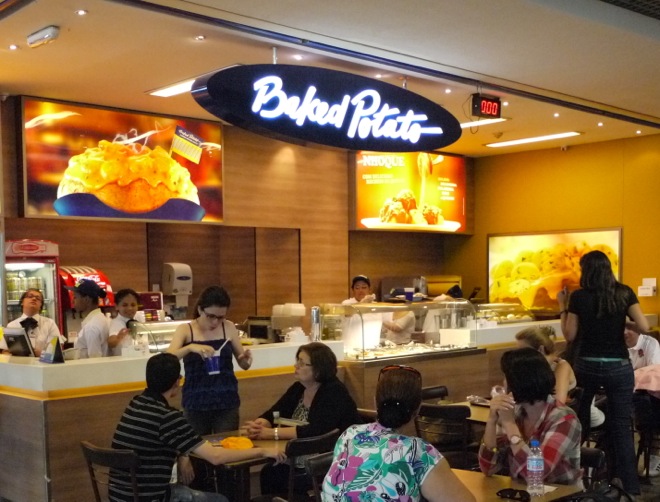 While traveling through Brazil this past week, I spotted an unmistakable piece of Americana at the smaller Congonhas airport in São Paulo, Brazil—a food court restaurant called the Baked Potato. (No, Don Randi and Quest haven’t moved to South America.)

Many people from around the world think of hot dogs and hamburgers as being American food. It’s sad that they’re even less informed about our regional cuisines as we are of theirs in many cases, though it’s easy to understand given that it’s mostly our fast food restaurants that sadly pervade their landscapes. But the fully loaded spud? It’s ours! Sure, the potato is native to South America, but it was North American ingenuity that split it, buttered it, and dropped a huge dollop of IMO, bacon bits, and chives right in the middle.

This may be the only distinctly American food to travel to Latin America, unchanged. Oh no, even they can’t resist the tried and true flavors of broccoli and cheese, industrial sour cream, and bacon bits. Baked potato-themed restaurants are big in Mexico, especially in the urbanized youth culture of the north in places like Tijuana, which has many papa rellena spots around town.  The American spud has tumbled through Central America and now has conquered South America.

Oh, I know most of you make them at home, or take them for granted when they come with your steak at Sizzler, but I invite you to a night of funky jazz fusion from some of the best musicians on the planet at L.A.’s own The Baked Potato—musicians call it the spud, Daddio—to celebrate America’s fully loaded, giant tuber, where toppings like sautéed mushrooms and cheese (or even teriyaki chicken) are king.