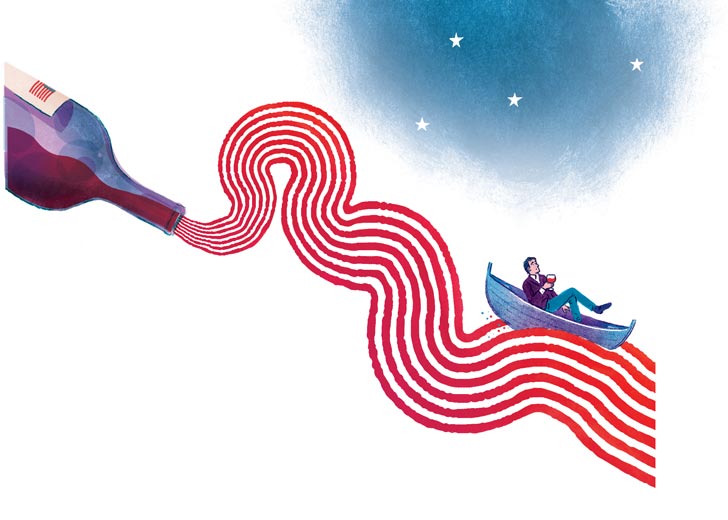 Of course I drink American wine, just as I’ve listened to American classical music, driven American supercars, and vacationed on an American island. I’ve enjoyed rasslin’ a lunkheaded Ridge zinfandel with a cheeseburger at a barbecue. But I usually prefer something that permits me to taste my food, so I reach for the old-world bottles that dominate my cellar. You know how it is: American wines are overpriced, overfruited, overobvious, over-American. If they could explode and take off their shirts, they would. I have little doubt there is, in fact, a wine called Explode and Take Off Your Shirt.

But a couple of years ago my friend Dave Gibbs—one of the owners of the country’s best wine bar, Augustine in Sherman Oaks-—brought a 1987 Joseph Swan cabernet sauvignon to my house. It had softened but retained all its fruit, like a Botoxed, hair-plugged American. And it was delicious. “When people complain about American wine, they’re talking about the $30 cab they buy at Gelson’s. There’s 100,000 bottles of it. Plonk is plonk, whether it’s from America or France or Chile,” Dave said. To keep him pouring, I nodded, as if I had ever bought wine at Gelson’s.

Still, I couldn’t bring myself to spend $30 on an American cabernet. Put it toward a burgundy. Dave argued that at this price point, I’d do better in California: “Stack a $30 bourgogne rouge against a $30 Domaine Eden or Chalone or Calera Central Coast. The poor burgundy wouldn’t stand a chance.” Actually, he said, I needed to stop comparing domestic wines to their European counterparts.
“Do we compare soccer to the NBA?” he asked me. Well, yes, I do. And soccer is much better.

Dave insisted that I had been closed-minded. In an effort to convince me, he poured a 1979 Hanzell pinot noir, a 1978 Stony Hill gewürztraminer, and a 2014 School House pinot noir. And he made me a convert. So much so that I even drank a 2012 Lemelson pinot from Oregon with salmon, feeling brave and adventurous like Lewis and Clark, and I tasted the wildness they experienced while eating their dogs because they thought salmon was disgusting. Americans can be closed-minded that way. But not me.