Home Drinking Cocktails Bitter and Better: Getting Your Amaro Fix in L.A. Is Easier Than... 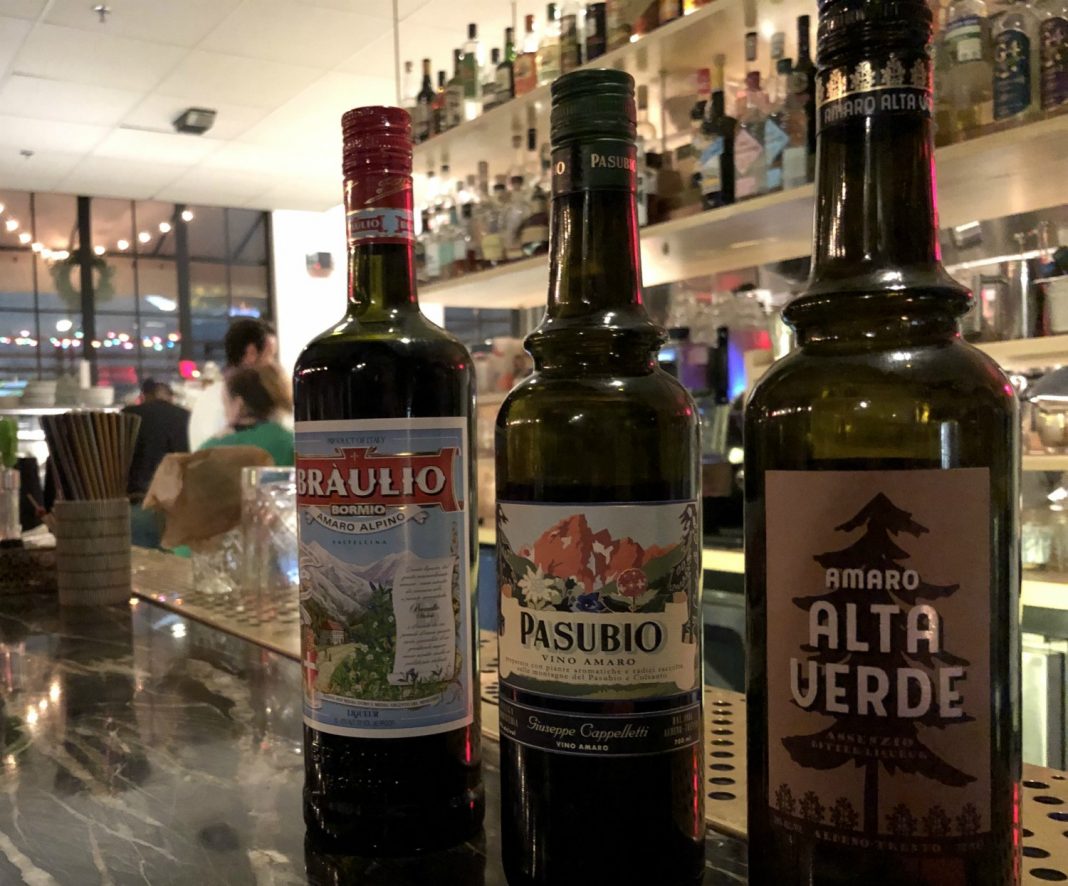 After dinner at the modern pizzeria Ronan on Melrose, once the last bite of char-speckled crust has been devoured and all that’s left are crumbs and an empty glass, the waiter brings the dessert menu. The traditional treats are up top, but that section is dwarfed by the one below, a lengthy list of the liqueur called amaro, mostly Italian, mostly bitter, mostly delicious, and totally perfect for a nightcap.

Amari are traditional Italian after-dinner drinks, often made from a fortified wine base infused with a collection of herbs, spices, fruits, and/or vegetables with a complex balance of bitterness and sweetness, and an ABV somewhere between 15 and 40 percent. They come in a rainbow of varieties, from intensely concentrated to light and crisp, and they tend to be born of regional styles with recipes passed down through generations, featuring local ingredients like menthol, citrus, artichoke, rhubarb, or truffle.

Nick Meyer, Ronan’s bar director, has been a fan of amari since his days at Sotto, where he met husband-and-wife chef and GM team Daniel and Caitlin Cutler. When the three of them teamed up to open Ronan, they knew amari would be a significant part of the drink program, meant to be consumed with dessert, in the Italian style. After the cocktails and wines that pair with the savory stuff, an amaro becomes another course in a long, relaxing dinner. Mozza Osteria, Hippo, and the Greyhound also have good selections. Those wanting to replicate the experience at home should check out what they’ve stocked at Eataly in Century City.

If you’re new to amari, Meyer has two favorites that he recommends in particular: Rucolino, a vegetal amaro that’s made on the island of Ischia from wild arugula, and Pasubio, which is named for the mountain in Northern Italy and made with alpine blueberries, which show up prominently in the flavor profile.

Ronan also offers a guided amaro course, which can be tailored to your preferences and usually includes at least one from each primary category. If you’re lucky and curious, you may be able to get a pour from Ronan’s semi-secret collection of vintage bottles, some of which are 50-plus years old.

Amari work beautifully in cocktails, too. In Ronan’s the Lone Warrior, their take on an old fashioned, they use two different amari to sub for other ingredients: Rucolino for Angostura Bitters and Amaro Angeleno to replicate a twist of orange. The drink is Meyer’s flip on a classic base, a fitting approach for this drink, whose name refers to part of their inspiration in opening Ronan, the masterless samurai known in feudal Japan as rōnin.

The citrusy amaro that they use in the Lone Warrior, Amaro Angeleno, has a story of its own. Like Meyer, Amaro Angeleno founder Stephen Sakulsky fell in love with amari while running Italian restaurants over several years. He was inspired by their regionality—the big herbaceous amari made in mountainous northern Italy compared to the citrusy sharp ones made in the country’s warmer southern region—the use of native flavors as bittering agents, and the secret recipes closely guarded by families.

Sakulsky is a third-generation Angeleno with a lot of pride in his city. When he decided to make his amaro he knew it had to be a spirit that reflected the landscape of the region he loves, an “amaro of place,” as he calls it. It’s a way to “lay down some roots and some history,” he says, the kind of thing Sakulsky can someday pass down to future generations.

He drew on Southern California history for the flavor of Amaro Angeleno, using the region’s long tradition of citrus groves as inspiration and then tempering the fruit with a heap of locally grown herbs and spices for bitterness. There are 17 of them, to be precise: chamomile, thyme, oregano, marjoram, anise, and many more.

Citrus is the dominant flavor but those bittering agents come through on the palate, a balancing smack in sharp contrast to the fruit up-front like Icy Hot for your esophagus. Amaro Angeleno’s complexity makes it great in a cocktail like Meyer’s Lone Warrior but punchy enough to drink over ice with a twist or in a simple Italian-style spritz, a burst of quintessential Los Angeles in a glass bottle.

RELATED: 5 Places to Get Really Good Housemade Pasta in L.A.