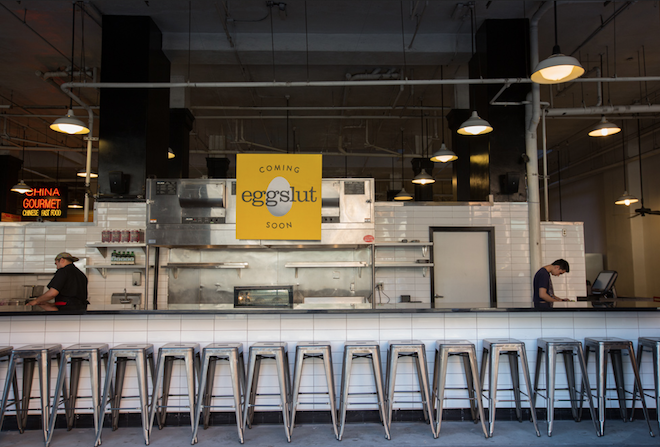 For a guy whose meteoric rise started with eggs, calling his next project an “incubator” isn’t a joke. Alvin Cailan, chef and owner of the truck-turned-egg sandwich stand Eggslut, announced his newest creation, Unit 120, a creative space in the Far East Plaza in Chinatown for chefs to test menus and concepts. The first series to launch will be an ongoing pop-up with Lasa, a Filipino-American hybrid from brothers Chase and Chad Valencia, beginning later this month.

Located in the same mall where he originally launched Ramen Champ last year, Unit 120 takes over the former pho restaurant on the ground floor, where wood paneling and yellow walls have been replaced by a clean, whitewashed space. “I thought: If I just strip everything down it would look like a gallery, and it would be cool to mix art and cooking together” Cailan says. “And at the end of the day cooking is art, so let’s showcase chefs like artists. Instead of art on the walls, they can do menus.”

A culinary incubator fits the changing neighborhood that’s equal parts art galleries, old-school mom-and-pop shops and restaurants and an eclectic stew of new flavors, from New Orleans-inspired po’ boys to authentic Thai cuisine. Unit 120 is like a blank slate that can be transformed into whatever a visiting chef wants it to be via food.

Lasa, which has been doing Filipino pop-up dinners around Los Angeles for two years, is the perfect example. Cailin sees the rise in popularity of Filipino food in L.A. right now—he himself is working on his own concept for a future project—and welcomed the Valencia brothers to cook in the space. “Their food is amazing,” says Cailan. “Our goal is to find them a home. If their cuisine and concept really takes off, I don’t see them having an issue anywhere in the city.”

In addition to overseeing the space,  Cailan sees Unit 120 as an opportunity to help guide new restaurateurs. He uses the success of Eggslut, which will expand to Venice and Las Vegas this year, as his guide.

“I don’t look at it as a business opportunity for myself. It’s more for the industry,” he adds. “Five years ago, I had this concept and a food truck. I’m here to help connect the dots, if needed. We know accountants that specialize in the restaurant industry, lawyers, real estate agents. Before they make that jump, new restaurateurs can try out an idea here and see if it gains some traction. If it doesn’t work out, it doesn’t work out. But they won’t be spending a half million dollars on a restaurant and closing in a year.”

Unit 120 will also serve as a space for visiting chefs, both local and those from around the country, including some super stars from Portland, where Cailan went to school and cooked during his most formative years as a chef, and New York. He’s been hitting the food-event circuit pretty hard recently, and he says he’s made a lot of friends along the way.

The space is fairly simple, just a few jazzed up picnic tables for communal dining, and white walls. He says the dinners will be priced “for people who love food,” not fine dining. Each event will have special permits for selling and serving wine. While he’s not releasing any names yet, look for a Portland invasion in February, where a different chef will take over each week, and a New York invasion in March. ““Sometimes you get so tired making the same dishes over and over in your own restaurant, it’s nice to break out and do something different,” he explains.

“This isn’t a Bill Chait Test Kitchen, it’s more like an open mic. It’s like a punk rock situation.”

As for Eggslut, the next location to open will be at The Cosmopolitan in Las Vegas this spring, probably March. You’ll find almost all-day restaurant (opens 10pm-5pm) on the second floor near Jose Andres’ China Poblano and the Chandelier Bar. After that, he’ll open Eggslut Venice, on Windward near the beach. Along with his partners, he hopes to open a couple more locations in 2017.