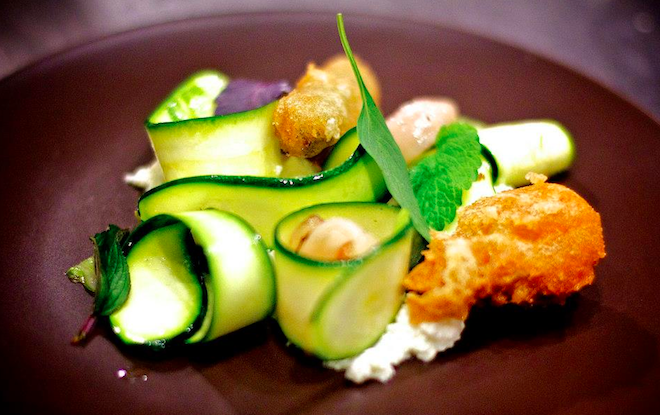 This week, Bon Appetit revealed its September issue special: their picks for the country’s best 50 restaurants. It’s a fairly well laid out list, we have to say, with a distribution that mimics the country’s population. Eventually, the magazine will pick just 10 new restaurants to feature in the upcoming print edition. Until that hits newsstands, we’re thankful that Bon Appetit restaurant critic Andrew Knowlton favored some of our (well-deserving) hot spots in L.A.

Downtown’s Alma, and Bar Amá, Echo Park’s Allumette, Hancock Park’s Chi Spacca, and Hinoki & the Bird in Century City all made the cut. Here’s what Los Angeles magazine had to say about these newcomers:

Alma: “With a menu that includes epazote, whey, malt, and sea rocket Taymor picks in Malibu coves, the cooking at Alma can be a challenge to categorize. At times it seems like the sort of thing Euell Gibbons, author of the 1962 foraging classic, Stalking the Wild Asparagus, would have come up with if he’d had access to a nitrous oxide charger. Gastro Expressionism? Whole Earth Romanticism? Haute Ashcan? Whatever you call it, Taymor is an undeniable talent at an early point in his career.”

Bar Amá: “Fittingly, for a guy whose home state may as well have a Weber grill in its official seal, Centeno is particularly good with meat. He breaks down the racks of goat he gets from the Central Valley, rubbing them with ground cascabel chiles and serving the grilled chops with belly, a few slices of roasted leg, and a side of coleslaw. The beef fajitas (sold by the pound) arrive in a sauce based on his father’s marinade, a bold concoction that at first snort seems equal parts fresh-squeezed limes and Worcestershire sauce.”

Allumette: “This little restaurant has tried to be many things many times. Now the owners are taking a chance on 25-year-old Miles Thompson, of the arty pop-up the Vagrancy Project. The result is more highbrow than the area wants or needs—but damn if it isn’t delicious.”

Chi Spacca: “Chad Colby is the chef behind Mozza’s meat-curing program, and now his talents are on display in this small open kitchen. The star attraction is still the salumi, which is peerless in the city: 24-month-old prosciutto has a cheddar-like bite; fresh chiles spike a rustic salami.”

Hinoki & the Bird: “…the side dish of yaki onigiri—grilled organic rice balls whose charred crust gives way to an almost creamy lushness. A platter of unpeeled pickled carrots and daikon slices needs only a few chunks of sesame-sprinkled mango for contrast. Crisp calamari seem too pedestrian—until you dip them in the accompanying tomato jam that’s heady with the smokiness of ajwain, a spice popular in Singapore.”