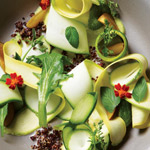 The evening sun shines through the sackcloth screen on Alma’s window. An early Chez Panisse poster hangs behind cracked glass, while across the room stands a bookcase with tomes from Mugaritz and Noma, two restaurants—one in the Spanish Basque country, the other in Copenhagen—that are among the lodestars of this downtown kitchen. I’m not certain the “hay-roasted potato” derives directly from Noma’s René Redzepi, the Danish chef who finds inspiration in tidal pools and hedges, but the message is clear: Alma is uncompromising. Sure, the room sort of recalls a ’90s coffeehouse with its spare layout of loosely arranged tables, but that only heightens your focus on those German Butterball potatoes, which acquire golden hues and an incredible nuttiness when roasted for eight hours under a layer of organic oat grasses.

The chef, 27-year-old Ari Taymor, hasn’t yet reached the stage where he can shake the influence of the culinary world’s big names. Nothing wrong with that. His cooking might have some derivative elements, like the ash meringue on the sunchoke split (helpful hint: a dessert) that comes from the playbook of Mugaritz’s Andoni Aduriz, the Spanish chef for whom the residue of fire is a staple. But Alma also burns with a refreshing passion. Situated on a stretch of Broadway that is only beginning to be hit by ripples from the downtown revival, it lies across the street from the gothic United Artists Theatre building that’s slated to become a trendy Ace Hotel next year. The narrow white-walled room—dominated by the open kitchen on one side and a lengthy bench seat on the other—was once home to a kabob spot. Now it’s a transitional restaurant in a transitional part of downtown. A Saved by the Bell lobby card decorates the bathroom, and the menu is printed on a single sheet of college-ruled notebook paper. Ring them up and you go to Google Voice; your receipt is texted from Squareup. Techy efficiency and civic idealism (they’re planning to give internships to inner-city kids) combine in a low-budget boho restaurant that is pleasantly different from downtown’s larger, shinier operations.

Originally from Palo Alto—his aunt is the Tony-winning director Julie Taymor—Taymor has a degree in international affairs from D.C.’s George Washington University. He got into cooking only seven years ago when a life-altering meal at Chez Panisse led to an accelerated schooling highlighted by stints at Lucques; Armand Arnal’s Provençal culinary think tank, La Chassagnette (located in a nature preserve and open only six months a year); and the San Francisco pasta shrine Flour + Water. Following a brief gig at Saluté in Venice, he launched a string of pop-ups around L.A. before landing on Broadway. Walk in and you might find Taymor in the kitchen, kneading miso-buckwheat rolls as beverage director Chris Yamashiro—he was tending the Maggie’s Farm market stand when he met Taymor—tops off a glass of one of his powerful house-brewed ginger ales (Alma has no liquor license yet) and general manager Ashleigh Parsons (a Harvard grad, natch) waits on customers. Or waits for them. The quirky atmosphere leaves you feeling as if you’ve happened upon an art house performance piece being played out for the few who are wise enough to venture in. Seeing Alice Waters smiling on the seafoam green banquette one night only added to the effect.

With a menu that includes epazote, whey, malt, and sea rocket Taymor picks in Malibu coves, the cooking at Alma can be a challenge to categorize. At times it seems like the sort of thing Euell Gibbons, author of the 1962 foraging classic, Stalking the Wild Asparagus, would have come up with if he’d had access to a nitrous oxide charger. Gastro Expressionism? Whole Earth Romanticism? Haute Ashcan? Whatever you call it, Taymor is an undeniable talent at an early point in his career. Intent at the stove (he doesn’t serve pastas because to him they demand single-minded devotion), he still hasn’t quite gotten over the pop-up notion that every plate must be a showstopper. Though he corrals lesser-known plants (like chickweed) with all manner of gels and whipped essences, it’s when he uses more familiar points of departure that he is at his finest.

For instance, the house-cultured butter—its flavors deep and clean—that comes with the small basket of bread shares a tangy hint of fermentation with those miso-inflected buckwheat rolls. Likewise Taymor reimagines the standard hors d’oeuvre tower of potato, cream, and caviar as a free-form appetizer, anchoring smoked cipollini crème fraîche and sustainably harvested hackleback eggs with fried fingerlings. The squishy, crunchy texture of the potato, the campfire note of the smoke, and the briny trill of the roe combine in a spectacular way. I wouldn’t heap the same praise on the beer gel that’s dabbed under corn and bacon beignets (when beer becomes that pronounced, you kind of want it in a glass), but thankfully there isn’t enough to counter the main element, a salt made from burned rinds of lime and Meyer lemon that’s sprinkled onto the beignets as they are lifted from bubbling oil. Stunning.

If Taymor’s style of cooking has a throughline, it’s the way he layers distinct ingredients, superimposing them in a progression that incrementally ratchets up the taste. Granted, things can get molecular here, but the effects tend to work. A bed of red bell pepper puree thickened with xanthan gum serves as a base camp from which the applewood-smoked whitefish, watermelon juice spiked with fish sauce, and chamomile granité begin their nervy ascent. A tier of pureed lovage—bright green, as if pulled from a mountain stream—brings a crucial acidity to the hay-roasted potatoes, which rest in a pool of N20-lightened Humboldt Fog. That herbal pop provides the creation with an internal structure; without it the preparation would just be a raclette with airs. Fried quinoa delivers a little heft when sown over a salad of raw squash ribbons and crumbled feta. The marigold petals Taymor also works in can’t do that. For a hot appetizer Yamashiro pours an intense sunchoke cream from a mason jar onto charred chicory and a soft-cooked egg. Neither a soup nor a velouté, it’s as sophisticated a country-inspired dish as I’ve ever had.

Given the exploratory nature of Alma, there are moments when Taymor inevitably overreaches. Steaming corn soup does away with the nasturtium ice cream before you can take a slurpy bite; pimped with a gleaming quenelle of soy and squid ink sorbet, a cayenne-laced beef tartare loses its force. The restaurant’s pop-up origins might have something to do with this. The menu changes so frequently (during the several times I’ve been, not once did Taymor offer the same lineup), the kitchen must find it difficult to tinker and refine. Pop-ups can also insulate a chef: When a dish doesn’t fly, customers might chalk it up to the fleeting nature of the place. So why complain to the kitchen? Maybe that’s why Yamashiro quietly retreated after he asked about my seaweed-crusted beef and I admitted the meat was tough. It must have been an off night because the sweetbreads with celery root were raw pink at the center, an unneeded reminder that they are the thymus gland of a veal calf. Sweetbreads are meant to be blanched and then, at pickup, roasted or sautéed. From Paris to Buenos Aires (where they are part of any good asado), these vittles are cooked through.

Taymor and his crew are too skilled to let the quality fluctuate like that. After all, this is a kitchen that can roast salmon so attentively over cedar planks that the fish retains the bright color and texture of sashimi; a puree of burned eggplant that’s been boosted with sherry vinegar gets the dish to Umamiville real fast. The slowly braised Boulder Valley beef is a preparation that displays a mastery of several styles of cooking, from cutting edge to haute. The chopped oyster and tarragon persillade lends a crystalline sharpness to the meat, while a helping of brown butter hollandaise envelops it in a gorgeous richness. Similarly Taymor’s version of chicken wings—an appetizer that playfully evokes bar fare—requires the wings to be confited, then seared in duck fat. But it’s the curlicues of brined apple and celery strips that provide definition. Chicken wings, deep fried or not, are fatty; the astringency of celery counters that. Finally it becomes clear why the two are served together. I just never expected to have such a revelation in an eight-table restaurant next to a hostess dance club.

Alma captures elusive shades of flavor without obscuring any of the ingredients, and it is exciting to see that sensibility extended to desserts. A smoked date foam lends an almost haunting touch to a parfaitlike tumbler of black sesame panna cotta with Mast Brothers chocolate sorbet and crisped puffed rice. The sweetness of a Turkish fig—plump on the plate, with walnut granola—is tamed by a bitter, dark wildflower honey. For the sunchoke split Taymor cooks the root down in caramel, presenting it on a primer coat of a blowtorched marshmallow flavored with Nocino, a walnut liqueur. The ash meringue shards he places on the arrangement create a sylvan dialogue with the birch ice cream at the dessert’s core. I tasted and retasted this ice cream, trying to find words to describe what the birch bark imparts, but nothing came to mind until I turned to good old Euell Gibbons. “It tastes more like pure spring water than anything else,” he writes, “but it has a faint sweetness and a bare hint of wintergreen.” I didn’t pick up on the wintergreen, but I don’t doubt that’s it.

Atmosphere: Create it yourself

Kid friendly? The space is, but the food requires more adventurous young eaters

Parking: Street or nearby lots