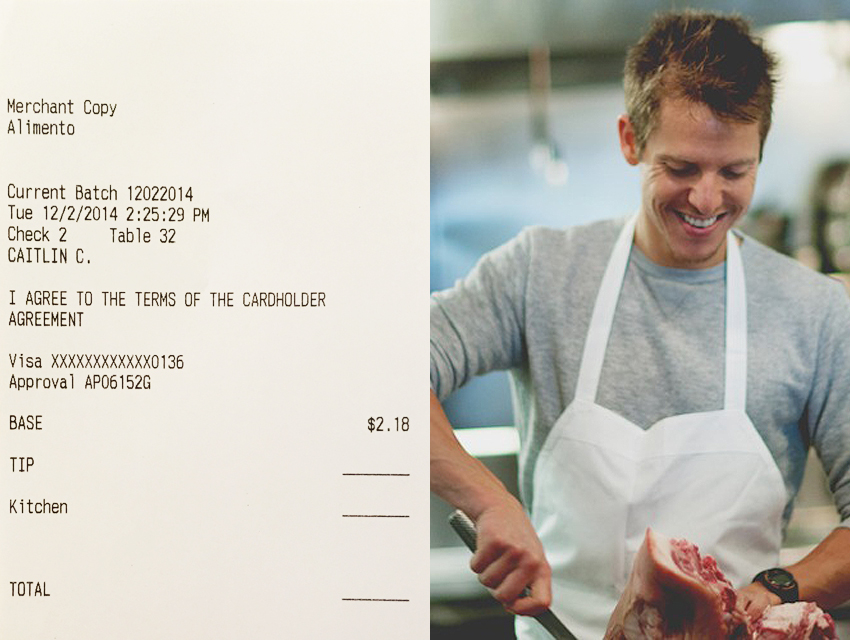 Get ready to do a little more math at the end of your meal. Starting tonight, Silver Lake’s Alimento will institute a separate line on all checks for kitchen gratuity—the first of its kind in the nation, as far as we can tell.

Alimento chef-owner Zach Pollack came up with the idea after losing two of his best line cooks to higher paying gigs. “They couldn’t make it work on their end, and I couldn’t make it work on mine—this is a small restaurant,” he says. “But at the same time, the servers are walking away with a lot of money. That’s great, but it put an issue in the spotlight that I’ve been aware of for a while.”

The restaurant industry has long struggled to shrink the pay gap between front-of-house and back-of-house staff. Kitchen line cooks, prep cooks, and dishwashers typically make less than $10 an hour to start—Pollack began his career making around $8 hourly. “As cooks, you console yourself by thinking, ‘I’m getting paid an auxiliary income in the form of resume credits and experience,’” says Pollack, “But that argument is hard to rely on in the end.”

Restaurants across the country have begun to address the disparity by building in 18 or 20 percent service charges, or, as is the case with local establishments like Mélisse, A.O.C., and République, adding a 3 percent surcharge that goes toward employee healthcare. Alimento’s additional gratuity will only be divided among dishwashers, line cooks, and prep cooks. “My sous chefs aren’t getting a cut,” says Pollack, “and, of course, neither am I.”

How does the waitstaff feel about the idea? “They are actually excited,” says Pollack. “I’m guessing people will still default to giving service 15 to 20 percent, but even if they give only a few bucks to the guys in back, it will make a huge difference.”

He’s also hoping the new model could impact the way cooks are compensated throughout the restaurant world. “I have this fantasy that more restaurants adopt this strategy,” says Pollack. “ If they do, then the logical conclusion would be that the restaurants serving the best food would garner the best tips for cooks, which means the best restaurants would be able to sustain better cooks, rather than losing them to hotels, country clubs, or lounge restaurants that are able to subsidize kitchen labor with extra income.”

Time will tell if the strategy takes hold at Alimento, let alone at restaurants nationwide. For now, a small card printed with the following statement will be distributed with each bill:

“At Alimento, we believe a great meal comes together not from the effort of any single person, but from the successful cooperation of a team of people, from servers and hosts, to cooks and bussers. Nevertheless, traditional tipping has created a very sizeable gap between the earnings of cooks and servers, and current State law prohibits restaurants from sharing servers’ tips with kitchen staff.
“Rather than imposing a mandatory ‘service fee’ or ‘kitchen surcharge’ as many are doing, we’d like to leave the choice in your, the diner’s, hands. If you’re perfectly happy with tipping as usual, there’s no need for you to do anything differently. But, if you’d like to send a little love to the lads and ladies hustling in the back, we’d be honored to provide you the means to do so. All such tips will go to line cooks and other kitchen staff; no one in management will participate.
L.A. has many great restaurants, and we’re thrilled you’ve chosen to dine with us today. We will continue to work hard to bring you the best dining experience we possibly can.
Thanks for your ongoing support!”

We plan to follow up and see what the early reaction is from diners and staff. For now, we’re just glad our phones come with calculators.