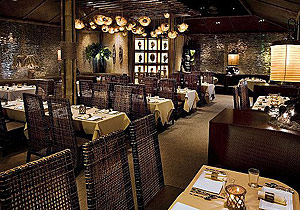 There are some great   online   roundups of the various restaurant V-Day happenings around town, but this is a new one:

“WE’RE NOT DOING ANYTHING SPECIAL”

Owner Andrew Hewitt explains in a release: “We feel, in these difficult times, people should have the freedom to choose whatever suits them from our menu rather than being forced to order what we tell them to have from an overpriced ‘special’ menu.”

Um, OK—do I agree that spending $125 a person for a three-course meal that might cost you $85 any other night is dumb? Yep. But to advertise “doing nothing” like it’s, well, something is a bit much. It also might be brilliant.

For the record, loads of restaurants don’t do anything in particular for Valentine’s Day. I usually spend mine at Silver Lake’s El Conquistador where the menu doesn’t change, but the owner Jesse parades around in a pink suit and you’re surrounded by giant, inflatable, red glowing hearts. Plus, what’s more romantic than tequila? Olé.