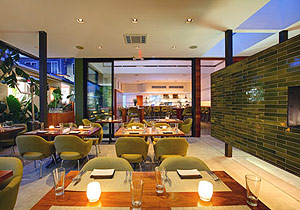 This is a new one. A few weeks back it was announced that Conny Andersson would be leaving AK restaurant in Venice due to “creative differences” with the financial backers. Now it looks like the owners have found a new chef and concept, and they’re ready to debut it tomorrow. Kinda.

Here’s the deal from the PR folks:

“Rather than closing to retool the restaurant, the popular destination on the bustling Abbot Kinney Boulevard (formerly known as AK) will become a transparent culinary case study. As Chef Casey Lane [who comes to us from Clarklewis in Portland] trains staff, implements new and improved kitchen techniques, seeks the freshest fare from the farmer’s market of that day, takes every detail exponentially to the max, and while the space undergoes interior and exterior modifications—the restaurant, The Tasting Kitchen—will remain open.”

So basically, instead of waiting until a successful new restaurant formula is found, we pay money to be a part of restaurant creation in action—the stumbles, pitfalls, lousy dishes, inexperienced waiters, kitchen meltdowns, and all. I sorta get it, but then…I don’t. It’s like Hell’s Kitchen, but we don’t get to be on TV.

The sample menu looks promising, actually. The “process” all starts tomorrow night and will run for eight weeks, at which point they’ll (hopefully) have found their groove and will reopen with a new menu, new look, and new name in the Fall.