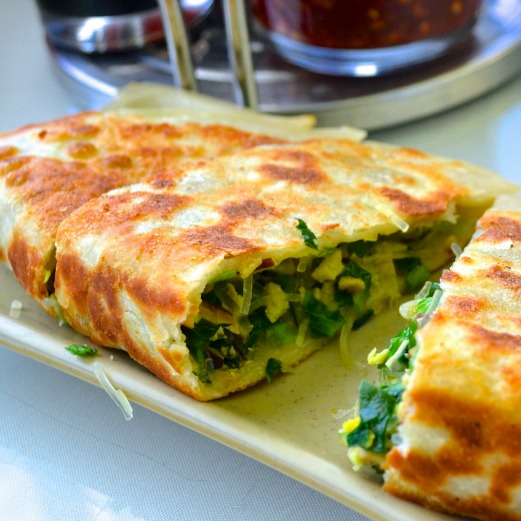 Dong Bei, or Northeast China, is comprised of three provinces: Liao Ning, Hei Long Jiang, and Ji Lin. Shen Yang is the capital city of Liao Ning, as well as being the largest metropolis in the region. This capital city is also the namesake for the newest branch of the Dong Bei cuisine specialist Shen Yang, now open in Rowland Heights.

You might want to think of Shen Yang as the antithesis to the popular Sichuan restaurant Chengdu Taste in Alhambra. While Chengdu (the city) is located in the Southwest portion of China, Shen Yang is in the Northeast. Chengdu Taste is famously fortified with fiery Sichuan peppers, among other fiery ingredients. Shen Yang approaches its cuisine in a much milder fashion, favoring fragrant vegetables like leeks for emphasis. There’s lots of mutton and lamb on the menu too, reflecting the region’s extremely frigid winters.

Both Shen Yang the restaurant and the city are influenced by its neighboring countries of North Korea and Mongolia (Russia is also a neighbor to the north). An example: Shen Yang’s Xi Ta Big Cold Noodles is a carbon copy of North Korea’s famous naengmyeon or cold noodles. Mongolian fare is strongly represented on the menu with plates like crunchy cumin-covered chicken bones—which appears very much like a chicken carcass after a feeding frenzy—to the multitude of hearty dumpling and noodle dishes.

An exceptional dumpling item at Shen Yang looks more like a hand pie or empanada. A Chinese favorite, the fried leek dumpling (or chive box in Chinese) is exquisitely golden brown, flaky, and jammed with chopped leeks, dried tofu, scrambled eggs, and glass noodles. It’s a very popular food in the capital city.

Sautéed kidney is also a top-selling plate at Shen Yang. The saucy stir-fry of pork kidney, sliced on the surface with crosshatches for tenderness and to trap the sauce, is much more delicate than most organ meats. There is a hint of liver, but, overall, this offal harmonizes nicely with the onions and bell peppers. Although Dong Bei food isn’t big on shoveling down rice with your dishes (the region is know for its wheat production), this kidney dish goes great with a bowl of it.

When I need to give my palate a rest from Chengdu Taste’s Sichuan tongue-lashings, I head over to Shen Yang for a Dong Bei break.