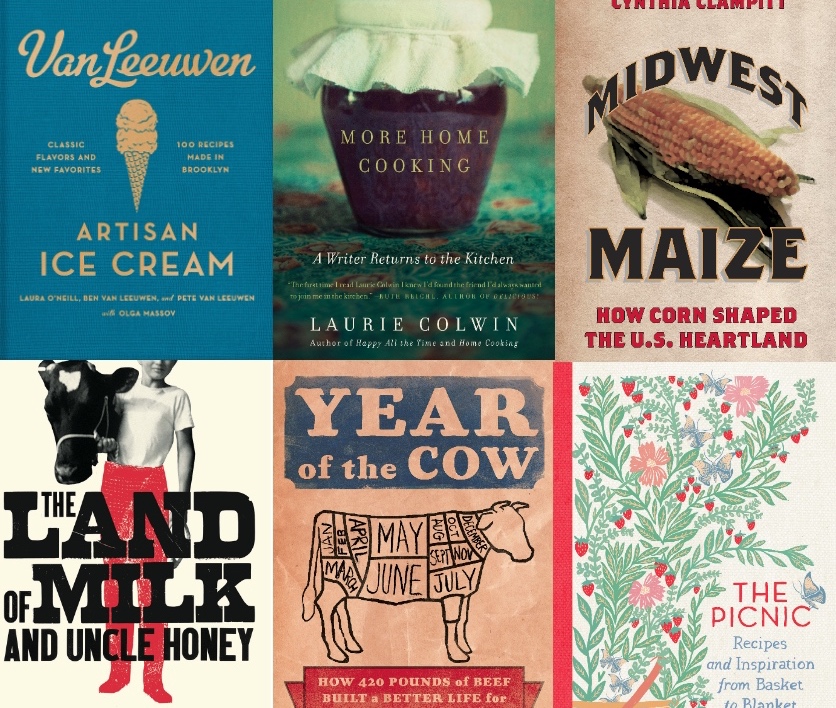 Sometimes the best vacations consist of a hammock and a good book. If food is your jam, reading about the philosophy of eating, the pleasure of cooking, and forays into restaurant-ing may be just the palate cleanser you need to escape for a few hours (or days) and reemerge rejuvenated.

Here are 10 books, from cookbooks to memoirs to ideological screeds, to dive into this summer–immerse yourself in a moveable feast.

Picnic in Provence
by Elizabeth Bard
Who doesn’t fantasize about running an artisanal ice cream shop in Provence? Elizabeth Bard took the plunge with her husband and opened Scaramouche Artisan Glacier in the tiny town of Cereste. Picnic in Provence chronicles the author’s adventure rustling up local ingredients, from figs to thyme. The couple’s obsession becomes a “kind of sugarcoated Tourette’s syndrome; we’re constantly blurting out comments about quince sorbet in inappropriate contexts.”

Van Leeuwen Artisan Ice Cream
by Laura O’Neill, Ben Van Leeuwen, and Pete van Leeuwen
If you can’t get to France yet yearn for some homemade frozen goodness, pick up Van Leeuwen Artisan Ice Cream . The flavors range from the classics, like mocha almond fudge and maple-walnut, to the unusual, like Sichuan peppercorn with cherry compote and coconut-avocado. There are also vegan options, sorbets, frozen yogurts and granitas. The book includes easy-to-follow instructions with all the basics. You may just find yourself opening an ice cream parlor in Tuscany.

The Picnic: Recipes and Inspiration from Basket to Blanket
by Marnie Hanel, Andrea Slonecker, and Jen Stevenson
This read celebrates summer to the hilt. Plan a party by theme, like Greek deli; learn to avert crises, like rain (as if!); and remember to bring your croquet set. This sweetly illustrated book will inspire you to actually pull together an evening of outdoor cinema or a well-thought-out park excursion. Try your hand at beet hummus or melon gazpacho. These simple warm-weather treats transform a day at the beach into a party.

Year of the Cow
by Jared Stone
For something meatier, turn to Year of the Cow. Determined to engage more with the food he eats, the author buys 420 pounds of beef from a rancher and decides to cook his way through it. While embarking on this adventure, Stone examines all things beef, from cattle’s impact on the environment to why certain parts of the animal are deemed inedible by many. Inspired by the Jean Anthelme Brillat-Savarin quote, featured in the book’s epigraph, “Tell me what you eat, and I will tell you what you are,” Stone’s valiant attempt to get a little control over what he eats, and thus what he is, is inspired.

Midwest Maize
by Cynthia Clampitt
A controversial vegetable (or is it a grain?), corn has been alternately celebrated and excoriated in America. Food historian Cynthia Clampitt jumps into the fray with Midwest Maize. As the author puts it, “It would be hard to overstate the importance of corn to the United States.” Clampitt recounts the history of the plant, originally from Oaxaca, and traces the journey of corn into the rest of the world. She also explains how maize came to dominate the Heartland, from Iowa to Kansas. There are also chapters on harvesting, popcorn, and even recipes, like Baked Indian Pudding, from the 1800s. Few things say summer like corn. Take a bite.

The Land of Milk and Uncle Honey
by Alan Guebert
The romance of farm life and the reality of farm life have very little in common. Alan Guebert’s The Land of Milk and Uncle Honey delves into life on Indian Farm in Illinois during the fifties, sixties and seventies. Divided into four sections made up of the four seasons, Guebert tells intimate stories of his youth, tied up in hard work and sacrifice. At Indian Farm, a dairy farm with 720 acres and 100 Holsteins, “the only break from the dawn-until-after-dark regime came on Sunday.” The routines of farming, ties to the land, and extreme labor feel like a wholly different time. And the world of agriculture has changed; now mechanized, Indian Farm has been transformed into an entirely different place, displacing every employee on the farm.

Fika
by Anna Brones and Johanna Kindvall
Turkish coffee, Italian coffee, Thai coffee…Swedish coffee? Fika celebrates the Swedish tradition of taking a break, having some coffee, and eating a pastry, a.k.a. “fika.” Like British teatime, or elevenses, this meal is “something almost everyone does at least once a day. To truly fika requires a commitment to making time for a break in your day, the creation of a magical moment in the midst of the routine and the mundane.” What’s not to love? Brones and Kindvall compile a scrumptious list of recipes, including sweets, like saffranskaka med mandelmassa (saffron cake with almond paste), to savories, like kumminskorpor (caraway crisps), to help you live like a Scandinavian. Whip up some pepparkakor (gingersnaps) and binge on Wallander.

More Home Cooking
by Laurie Colwin
A classic recently reissued, the great Laurie Colwin’s book of essays More Home Cooking is a favorite of none other than Ruth Reichl. A novelist with a love for food, Colwin writes with a cozy style that invites you in, sits you down, and serves you tea. The author’s recipes come from her own experiences, some from hard-won battles in the kitchen. Unpretentious and enthusiastic, with a love of comfort, Colwin coaxes you to attempt a new recipe, even if it’s intimidating and even if you fail. “It always seems to me that cooking is like love. You don’t have to be particularly beautiful or very glamorous, or even very exciting to fall in love. You just have to be interested in it. It’s the same thing with food,” says Colwin.

Delancey
by Molly Wizenberg
Charming from start to finish, Molly Wizenberg’s Delancey reads like a biography of a restaurant. A successful food blogger (Orangette), Wizenberg marries Brandon Pettit, a trained composer and dreamer. Lickety split, the author finds herself the de facto partner in a pizza parlor. With little practical experience, Petit throws himself into the minutiae of dough, sauce and toppings with a ferocity both touching and surprising. Wizenberg, with plenty of misgivings, gets sucked in by her husband’s passion and commitment for Delancey. Together they transform a dilapidated spot into a successful joint. If you can’t make it to Seattle to feast on a Crimini mushroom pie, try your hand at one of the author’s signature desserts, like shortbread with rosemary and candied ginger.

Sitting in Bars with Cakes
by Audrey Shulman
Food & Humor is not a traditional genre, but Audrey Shulman makes a case for blending the two in her memoir, Sitting in Bars with Cakes. Frustrated by dating in Los Angeles, Shulman has an epiphany: “Homemade cake was the icebreaker of the century.” Epiphany in hand, the author spends a year baking fifty cakes and taking them to fifty bars in an effort to find love. “Cakebarring” became a weekly occurrence at local L.A. spots, like The Pikey, The Phoenix, The Griffin, The Good Luck Bar, and The Basement Tavern. Bursting with cake recipes and dating anecdotes, this hybrid book extends the metaphor of food as a way to connect. Who knows, maybe a new craze will be born? How about Standing on the Corner with Pickles, or Lounging at the Dog Park with Jam? Food has a way of breaking down barriers, and Shulman illustrates this to perfection. Who in their right mind would turn down homemade hidden layer chocolate-raspberry torte or gin-and-tonic cake with lime zest frosting.