Home Uncategorized A Spoonful of Sugar: Jordan Kahn Gets Playful at Red Medicine 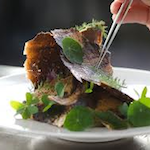 It’s early evening on a weeknight, and Red Medicine in Beverly Hills is already hopping. At the pass—the counter that separates the kitchen from the dining room—Jordan Kahn’s usually pensive mouth has curled up into a smile. The chef behind some of the city’s most precise creations has a great poker face—until you hit on a topic that he wants to talk about. I happened to ask about a bunch of purple flowers he was playing with during service.

“It’s a pea blossom, taste it,” he says, while dropping a bud into my palm. It’s crunchy, and moist and tastes grassy, like springtime. “It’s local, we picked them yesterday,” he says, gesturing to a large white plastic container filled with the flowers, all the same shade of violet.

The menu at Red Medicine has, in the last month, undergone some major reconstruction: Kahn is gradually eliminating all of the old dishes that he’s been making since the restaurant opened in 2011 and replacing them—yes, even the banh mi, even the chicken dumplings—with an entirely new list of savory items. These are inspired by the chef’s dedication to foraging for wild plants in his backyard, in and around the Eastside of Los Angeles. His sous chef lives on the Westside, and so forages for wild grasses and herbs that grow along the Pacific coast.

Foraging itself isn’t new. It’s how humans survived before the Neolithic Revolution, before we started farming our own food. And foraging in this, the farm-to-table era of modern, post Haute Cuisine dining, is already passé. Who doesn’t have a forager on file? But few chefs rely as heavily on wild food as Kahn, who used foraged plants as inspiration for his newest menu items, dishes that look more like modern architecture than meat or potatoes.

Red Medicine stands out from other, contemporary institutions (Michael Voltaggio’s ink. comes to mind, as does Craig Thornton’s Wolvesmouth) because Kahn is a trained pastry chef. He approaches the prospective components of each dish with a wider range of skills. Most savory chefs have no idea how to get bread to puff out into a hollow cracker, or sculpt sweet potato, but these are methods bakers have known for decades. When asked about his process, it’s clear that pastry techniques are at the top of his mind, “they’re literally all over my menu. They’re built into the way I think.”

Up above, check out a few of the newest items to hit the menu at Red Medicine. Each week this month and next, Kahn will introduce a new dish to the menu and take an old favorite off the list. Now’s the time to catch your last bite of beef tartare and Brussels sprouts—and taste the newest creations to come from Kahn’s complex, sweetly serious mind.