Home Uncategorized A Return to Fine Dining for Ludo Lefebvre 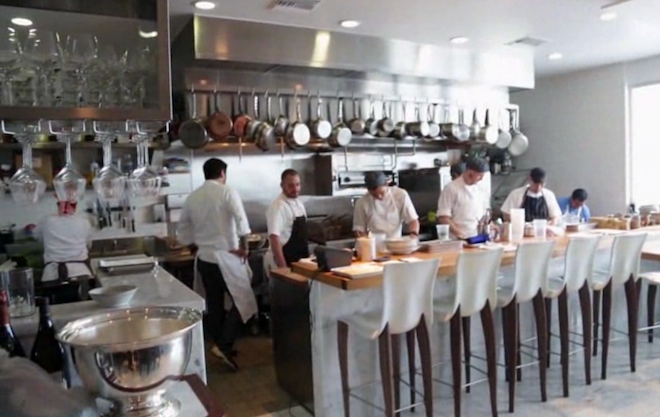 Critics around town have been raving about Trois Mec, the newest restaurant from chefs Jon Shook and Vinny Dotolo (Animal, Son of a Gun) in partnership with chef Ludo Lefebvre (of LudoBites fame). But no one had seen the inside of the place until The New York Times published its most recent profile of the L.A.-based French chef.

In it, we learn that Ludo is both going back to his roots (“I’m French, I’m French,” he said. “I forgot where I was from.”) and sticking to his technique—he says in the video accompanying the article that he’s never forgotten one thing when he cooked: “It’s really about the taste.”

Shook and Dotolo are charmingly disarmed in the video, which notes that they are arguably some of the most influential chefs in L.A. right now. They seem a bit surprised by it all, telling the Times: “This is something new for us,” Mr. Shook said. “The service. The reservations. The food. The tasting menu only.”

When Ludo was a road show with small bites and no permanent home, he was on the cusp of something new and exciting. With his white chef coat at the helm of Trois Mec, this dining experience is equally cutting edge. Along with his partners, he sees it as a way of bringing a bit of fine dining back to L.A.—all without getting too stuffy.

“Sometimes I think it’s gotten too casual,” Mr. Lefebvre said. “We need to bring a little more refinement back into the restaurant industry. I want good service. I want good hospitality. But in a casual way. Like you’re in a kitchen.”

“I think fine dining rooms are coming back … People want to have a good experience when they go to restaurants now. Not a froufrou like a three-star Michelin restaurant. But people want an experience.”

With Trois Mec, Ludo Lefebvre Has a Place to Call His Own [The New York Times]