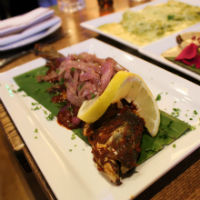 Radhika’s owner Karan Raina has been a frequent traveler south of the border ever since he hooked up with wife and partner Candy Garcia Raina, so when he finally decided to open a Latin-American concept, he didn’t go the usual route of hiring a high-profile consulting chef. Instead he went with Rocio Camacho, a demure, driven chef from Huajuapan de Leon, Oaxaca. Her résumé includes La Casita Mexicana, Moles de la Tia, La Huasteca, and the two branches of her namesake, Rocio’s Moles de Los Dioses. “She’s so down to earth and has great taste,” said a proud Raina, “and she’s not afraid to take a chance.”

Aro Latin has been open for a week, and it’s already packed with locals and regulars from Raina’s modern Indian restaurant on the other side of the Metro Gold line tracks in South Pasadena’s lively new Mission Street dining scene. The menu departs from Camacho’s refined regional Mexican cuisine and her mole-centric menus to explore more contemporary Latin fare. There are Indian touches here and there, like a chutney-style mole with fish, a Peruvian tiradito (raw strip of marinated fish), and a Salvadoran tamal inspired by Mrs. Raina, but the dishes owe more to Camacho’s creativity.

The sope de platanos, with refried beans, cream, and plantains on a sope, puts a clever spin on El Salvador’s classic breakfast combo. Straightforward cazuelas (casseroles) of addicting cochinita pibil (marinated roast pork) are served in a cast-iron skillet for making your own tacos, which is something you don’t see too often in Los Angeles, and a savory and spicy whole-grilled branzino is finished with an adobo-style sauce. The space is modern and stylish, with a cuisine to match courtesy of a hard-working chef who looks like she’s just getting warmed up.