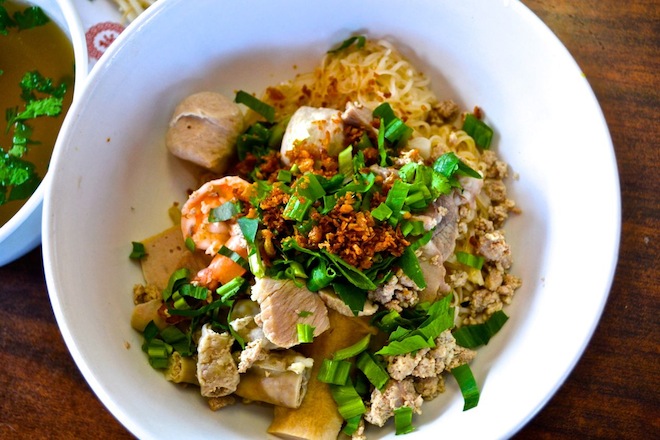 Cambodia Town in Long Beach was officially established by the Long Beach city council on July 3, 2007. Running along Anaheim Street between Junipero Avenue and Atlantic Boulevard, the area is populated by about 50,000 Cambodian Americans―the largest such community in the U.S.

Still, Cambodia Town is an undiscovered gem for most diners here in Southern California. This may be partly due to the immense popularity enjoyed by its neighbor Little Saigon, situated a bit south on the 405. The fact that Cambodia Town is considered a rough neighborhood doesn’t help either.

Regardless, some of the best Southeast Asian cuisine can be had here in our own little Phnom Penh, and at some of the lowest prices around.

Crystal Thai-Cambodian Cuisine is a small restaurant that strives for an authentic feel with its bright, color schemes throughout, framed ancient black and white portraits of fellow Cambodians, paintings of Cambodian rural life, and posters of Cambodian currency. However, the real deal here is the food.

Phnom Penh noodles, also recognized as kuy teav in Khmer and hu tieu in Vietnamese is generally considered a soup noodle although a “dry” version can be experienced too. At Crystal Thai-Cambodian Cuisine both variations are offered.

A heaping swirl of rice noodles is smothered by practically everything you can extract from a pig: boneless meat, pork meatballs, pork cake, ground pork, and “soul meat” (basically offals from intestines to liver). Poached shrimp, dried shrimp crumbles, and chopped scallions also complement the bowl.

Steaming pork broth comes separately in a smaller bowl if you choose the “dry” style, which is what I did. A small platter of bean sprouts and lime add crunch and zest to the noodle soup after all of the components are combined.

This is one of the heartiest helpings of noodle soup I’ve had in some time. A deep umami flavor is released once the scalding hot soup hits the dried shrimp. The noodles impart a satiating chewiness. No capsaicin heat is included in the bowl but there are many peppery options to choose from on the table.

Enhance your food hipster cred and have a taste of Cambodia Town. You can say you burned your mouth on the food because you ate it before it was cool. Oh, yeah.