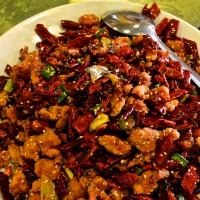 The San Gabriel Valley is a culinary melting pot brimming with delicious authentic flavors from all over China, Taiwan, Vietnam, and Thailand. With more than 200 restaurants on Valley Boulevard alone, the challenge isn’t really at which eatery to get your grub on, but rather how when potential gustatory road blocks like secret menus, unfamiliar entrees, and language barriers can keep you from diving mouth first into a tasty dish. During moments like this, wouldn’t it be dandy to have your own personal tour guide? That’s when a service like Curated Gnomes comes in handy.

Curated Gnomes is a culinary tour company founded by Clarissa Wei, a food writer for various outlets including KCET TV’s Web site. It keys in on various Chinese regional cuisines in the Valley, but Wei doesn’t simply lead her diners from restaurant to restaurant. Her fluency in Mandarin helps navigate the largely non-English speaking venues, and dispenses cultural tidbits and food history as well. For example, she explains,  “Sichuan and Hunan cuisine are both spicy but differ in that Hunan uses fresh chilies. Sichuan uses more dried chilies. Plus, peppercorns are a hallmark of Sichuan cooking (not Hunan).”

During the most recent crawl, participants walked from eatery to eatery, with the focus on the spicy cuisines of China. Six spots were on the roster, with the final two being places that would conceivably douse the flames. At Lucky Noodle King, diners were treated to dan dan mien, a Sichuan specialty plate of wheat noodles smothered in a goopy pork and chili sauce, and topped with crumbled peanuts. Hunan Chilli King dries their own red chili peppers in front of the restaurant on baking sheets and then incorporates them into dishes like spicy fish filet or the popular mapo tofu (which oddly translates to “pickpocketed grandma”). In keeping with the Hunan tradition, the mapo tofu here doesn’t include sugar. Tasty Dining hit the hot spot with a dry pot. Sichuan province’s dry pots are like hot pots, but without the liquid. Ours was a hodge-podge of bean sprouts, bean curd skin, potato, cauliflower, fish balls, and pig feet. Spicy balanced savory.

But my favorite of this moveable feast was a place called Spicy City. Spicy chicken cubes were popular, a plate piled high with chunks of battered chicken breast, dry-fried in a wok with chili peppers and Sichuan peppercorns. The result is double whammy of heat that hits you both from the front and back of your mouth. If you’re a pepperhead, this one will turn your endorphin spout on high, and you’ll never wanna come down.

For 65 bucks, you’ll hit six eateries, with a 10 person max per tour. So if a good time to you means burning calories while scorching your mouth, then Curated Gnomes’ spicy food walking tour is a match made in heaven—or that other place.

The next Spicy on Spicy Walking Tour will be on June 7. Check the Curated Gnomes site for details.