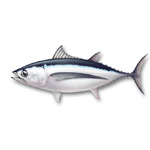 You can’t eat sushi today without talking about sustainability. But when the chef hands you a piece of succulent ruby flesh, it can be hard to know whether taking a bite makes you an irresponsible consumer. Kim Thompson, director of the Aquarium of the Pacific’s Seafood for the Future (SFF) sustainability program, dishes on the sustainability of the six most common sushi fish. Maguro
While bluefin tuna is well managed in the United States, it is highly migratory, and international fishing pressure continues to push the species into an overfished state. The SFF recommends U.S. Pacific yellowfin tuna (available from July to November) and U.S. Pacific albacore (from May to October) as a responsible substitute. Hamachi, kanpachi, hiramasa
Hamachi and kanpachi are both problematic. The SFF recommends only hiramasa, or California yellowtail, which is in season from April to September. Saba
Mackerel tends to be a good choice. The SFF recommends mackerel from U.S. local Pacific waters. It’s available year-round, with summer being the peak season. Shiro maguro
The SFF recommends U.S. and Canadian Pacific albacore, which is available from May to October. Unagi
Most eels featured at sushi restaurants are farm raised, but the eggs are harvested from the wild, which puts pressure on stocks that are already highly vulnerable to fishing and other man-made pressures. Sorry to say, but it’s best to avoid eel altogether.