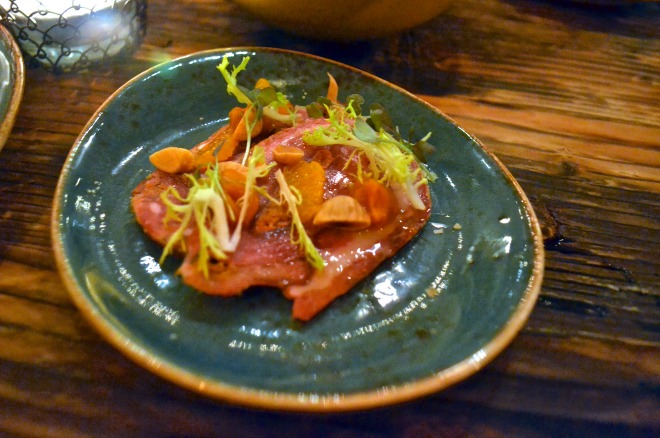 Chef Steven Fretz (Top Round, XIV) loves dim sum. One of his favorite restaurants for these delicious diminutive Chinese bites is Five Star Seafood in San Gabriel Square, and he always goes for the baked BBQ pork buns.

In fact, Chef Fretz loves dim sum so much, he and his team at The Church Key restaurant created a concept that essentially borrows the delivery system of traditional dim sum restaurants, i.e. push carts stocked with prepared small plates and served by surly cart jockeys. (Okay, minus the surly cart jockeys.) San Francisco’s State Bird Provisions, which also includes cart service for certain items, was also, at least, partial impetus for the concept.

Interestingly, the main inspiration for this “American dim sum” idea came from one of The Church Key’s first offerings — Benton’s smoked country ham freshly shaved off a deli slicer on a cart served tableside. From that, the question was asked, “Why not serve everything from carts?”

Those even slightly acquainted with dim sum cart service knows about the tabulation technique for the final bill. A card typically sectioned by either letters or numbers is stamped whenever an item is ordered, with each section representing a price category. At the end of the meal, the collected stamps are tallied. The same method applies at The Church Key, except they have cool stamps that look like trout, booze, and slices of cake.

Some of the more popular cart items are the hamachi sashimi, falafels with truffle tahini, and sticky toffee pudding. Among the unique dishes was the pig ear “Cheetos” made from a pig ear terrine that’s been dehydrated, sliced, fried, and finally dusted with cheese powder. Also exceptional was the slim roulade of lamb belly prepared succulently, showcasing the tender meat and unctuous fat, with honey offsetting the lamb’s subtle gaminess.