Home TV A Festivus For The Rest Of Us: Holiday Dining the Seinfeld Way 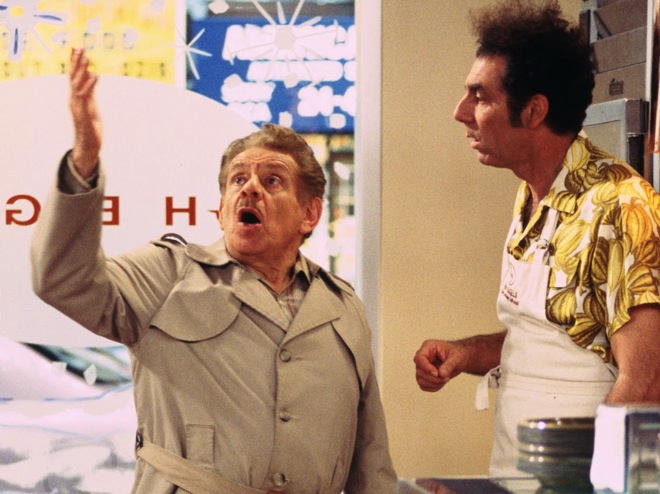 “Many Christmases ago, I went to buy a doll for my son. I reached for the last one they had, but so did another man. As I rained blows upon him, I realized there had to be another way.”

With these words, Jerry Stiller (as Frank Costanza) introduced Festivus to the world in a now famous 1997 episode of Seinfeld. Festivus, as Frank Costanza laid out, was a holiday celebrated on December 23rd, created for those tired of the traditional, highly commercialized holidays. As strange as it sounded, with rituals such as “Feats of Strength” (a wrestling match), and the “Airing of Grievances” (family members laying out how the others have disappointed them over the past year), it turns out that the Festivus holiday was actually based on the childhood experiences of Dan O’Keefe, then a writer for the show. O’Keefe’s father had created the obscure holiday many years before, and while Seinfeld did invent some creative elements to add laughs such as the Festivus pole, a cheap, undecorated (Costanza found tinsel to be “distracting”) aluminum alternative to a Christmas tree, much of the episode was based on the basic principles of O’Keefe’s holiday.

To celebrate Festivus in your own domain, you don’t need much really. You can order your own Festivus pole or make your own, using a large aluminum pipe or heck, even a shower curtain rod standing upright would do. As you’d expect from almost any holiday, dinner is the centerpiece of Festivus. O’Keefe explains in his book—The Real Festivus: The True Story Behind America’s Favorite Made-Up Holiday—that the meal usually involves turkey or ham, although other meats sometimes snuck in depending on family finances. As for accoutrements, think “mashed potatoes, gravy, beans, and a pecan pie for dessert,” with your table decorated with M&Ms and “odd little figurines” strewn about to add color. Alcohol—typically “Champagne, PBR, and cheap California white jug wine“— O’Keefe insists, is essential for a traditional Festivus celebration. (In the original TV episode, George Costanza’s boss, Mr. Kruger, is seen keeping it classy with a flask at the table.)

To get a little more creative in your celebration, FestivusWeb.com has a whole slew of Festivus dinner suggestions based on food items that played key roles in various episodes of Seinfeld. Think marble rye, chips or crudités and dip (with a “No double dipping!” sign), calzones, fusilli, or any number of soups that were to be found thanks to the “Soup Nazi,” like mulligatawny, jambalaya, or lobster bisque. For dessert, perhaps you’d like tightly wrapped crêpes, muffin tops, Snickers bars (eaten with a fork and knife, natch), or black and white cookies?

Whatever you decide to eat, just make sure you have a tape recorder going, because half the fun in next year’s Festivus is listening to the tapes from years past!

This article is an updated version of a work previously written by Randy Clemens for the former Edible Los Angeles magazine.