Home Drinking Wine A Different Kind of Bar Exam: The Grueling Test to Become a... 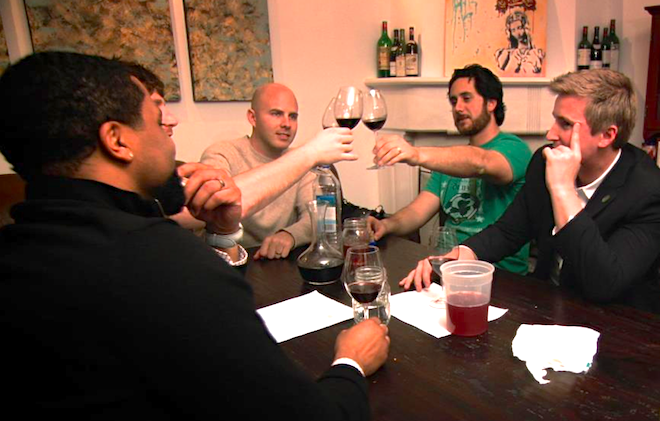 What’s more difficult than the GRE, the All Souls Prize Fellowship Examination, and the Kobayashi Maru combined? The test to become a Master Sommelier. The documentary Somm, out now, follows four men (almost all applicants are men) trying to ace the exam and earn the title of Master Sommelier.

The grueling three-part exam includes a written portion that covers history, geography, technique, as well as the ability to memorize obscure facts. The service portion might find aspirants serving the kind of customer who’d make Mother Theresa weep with frustration. Finally, there’s the blind tasting: 24 minutes to sample six wines (three whites, three reds) and determine not only the varietal and country of origin for each—that’s kid stuff for these experts—but to figure out the region, subregion, winery, and vintage while parsing the characteristics of each wine with microscopic precision. Even worse, applicants will never know whether their answers were right or wrong; they’ll only know if they pass or fail. Usually, it’s the latter. Among the 50 or so American applicants who take the test each year, only five or six pass.

Somm is mostly a film for food and wine nerds, which is kind of a shame since director Jason Wise manages to wring maximum drama from a story that might’ve been very dry—and flat with sharp, fruity topnotes. Friendships are strained, marriages are tested, exhaustion sets in. Of the four main characters, not all pass—and it’s not necessarily who you’d expect.

Novices, take heart. If you’ve ever secretly thought a wine smelled like cut garden hose or tasted like a can of freshly opened tennis balls, you’re in good company. These are just a few of the descriptors the pros in Somm like to use.

The film’s stars—Ian Cauble, Brian McClintic, DLynn Proctor, and Dustin Wilson—are über serious when it comes to learning about wine but perfectly goofy and down to earth about actually drinking it. And if you want a little professional wine guidance of your own, you can find McClintic and fellow wine pro Eric Railsback at Les Marchands Wine Bar & Merchants, a Santa Barbara wine bar they’re getting ready to open.

Somm is currently playing at the Sundance Sunset Cinema.