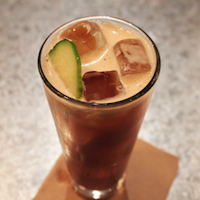 With a starting drink list of 10 cocktails sporting names like “Honky Tonk is Cheap” and “A Little Dickel Dew Ya” his assessment seems on the nose. Especially when those cocktails feature the likes of Mountain Dew reduction, hickory applejack, and Jack Daniels. The result is snort-inducing–thanks to the names with “rednecky movie references”–yet mouth-wateringly provocative.

Before he began to craft his menu, Dave took a look at what mixologist Phil Ward (Death & Co, Ebanos Crossing) did for Richter’s Fatty Cue. “I’ve always admired Phil when he did the cocktail menu for Fatty Cue when Robbie was in Brooklyn. When they asked me to do this cocktail program, the first thing I did was look at what Phil had done at Fatty Cue to see what they had done. I didn’t take any cues from it. I just looked through to see if the ideas I was having were similar and they actually weren’t.” In the end Dave drew inspiration from the Southeast Asian cuisine at Fatty Cue and Fatty Crab. “I had a really preliminary version of Robbie’s menu so tried to draw from Southeast Asian, Indian, Middle Eastern, French, Japanese but all on the substructure of just trashy American.”

Even though he uses elements like chrysanthemum bourbon, aloe liqueur, and Batavia Arrak Dave assures that his drinks will still be approachable to folks like Improv regulars. “I didn’t want to do anything too out there because the kind of people who are coming to the Improv on a regular basis aren’t necessarily into real experimental drinking. The food is experimental but is presented in a way that’s nonthreatening. I wanted to do that with my cocktails.”

Jimmy Dalton: Chrysanthemum bourbon, hickory applejack, PX Sherry, bitters, citrus oils. “We’re using the same wood that we use in the smoker. And doing a quick vacuum infusion of rye with red oak, and we’re doing the same thing with chrysanthemum and bourbon, which are two flavors that I’ve always liked alongside each other. The floral notes lend itself well to the mellow, woody notes of bourbon. That seemed to be a big crowd pleaser during Friends and Family night.”

Naven Johnson: Reposado tequila, Charreau aloe liqueur, Ramazotti Amaro, cucumber, salt, lime, ginger, soda. This cocktail, he says, will hit home for many as “ginger is a very en vogue thing right now.” The cocktail combines the flavors of an Amaro Buck “with the succulent element of an agave spirit and Charreau aloe liqueur.”

Honky Tonk is Cheap: Vodka, Amaro Montenegro, tamarind spiced pomegranate, lemon, orange, mace blade. “It’s our nod to a pomegranate martini or Cosmo. Obviously they’re selling $100 margaritas across the street [at Red O] so some people in the area are still riding that wave of cocktail decadence of the ‘80s and early ‘90s. So to have something that hails from that time but isn’t deplorable was important to me. Pomegranate tamarind replaces the cranberry and the Amaro Montenegro gives it a little bit of fun.”

Boots with the Fur: Aviation gin, White Dog whiskey, Clear Creek Pear, eau de vie, spiced apple honey, lemon. “I’ve been messing around with this since the Test Kitchen days. It’s a weird homage to the Apple Tini but with a fun Indian Sasparilla flavor.”

The Centurion: White rum, Passoa passion fruit liqueur, cognac, Amontillado sherry, red wine, lime, grapefruit, Don’s mix, soda. This is Dave’s play on the sangria and Kalimotxo but with a Tiki vibe. “We’re waiting on the right kind of red wine to launch that one. A Tempranillo works well, it’s full bodied and spicy and dries out.”

There Can Be Only One: Highland Scotch, Islay Scotch, dry vermouth, smoked salt and maple syrup. “A really funky Manhattan-y thing served up. It’s going to be hit with a little Islay peat at the end. Something like that I think pairs really well with smoked meats.”

The drinks will complement the cuisine. “The more fresh citrusy cocktails are going to go really well with the high fat stuff” like the Pan de Salvajes Texas toast with master fat and sea salt. While A Little Dickel Dew Ya and the Jimmy Dalton will go well with the chicken wings. “You want something that’s going to cool you off after that spicy sauce.”

Things to look forward to? A Jack Daniels and Coke slushie machine as well as a boilermaker menu, since shots have been very popular during the Friends & Family nights.

There’s a Sudden Burst of Color in L.A.’s Improv Scene

For the First Time Ever, an All-Latinx Variety Show Takes UCB’s Main Stage

What Improv Taught This 40-Something Mom