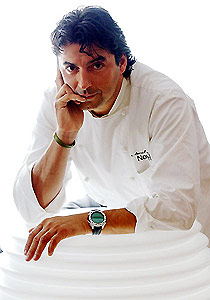 On the heels of the Top Chef Masters finale/Top Chef Vegas debut extravaganza last night, we hear news of yet another cooking-oriented reality show in the works for Bravo, this one set in L.A.: Chef Academy. The gist: Superstar French chef Jean Christophe Novelli tries to open a cooking school in Venice. Cross-cultural antics ensue.

Meet Jean Christophe Novelli—Europe’s renowned Michelin Chef and Novelli Academy owner. French born and residing in London, Chef Novelli is determined to open a top-notch culinary institute in the States, and he sets his sights on Venice, California. Working with Chef Novelli on the ambitious experiment is his executive chef and right hand man, Steve Kitchen. For additional support during his extended stay in America, Chef Novelli also brings along his pregnant fiancée, Michelle, and hires a temporary assistant, Joel. First order of business: selecting nine students to be his test subjects at his first Academy across the pond. But is America ready for this French culinary genius? Bravo’s upcoming docu-series "CHEF ACADEMY" is set to premiere fall 2009.

This sounds more like Flipping Out-meets-food than a cooking competition, which I guess gives the network grounds to air one more cheffy show. Hey, I’m not complaining.

UPDATE: Looks like the premier has been  moved to December.