Home Uncategorized A Big Bowl of Fresh Air as Chego! Settles Into Chinatown 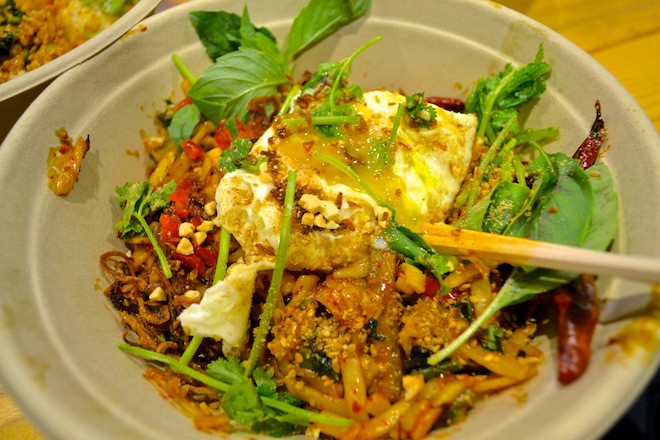 Chef Roy Choi, who recently reopened Chego! in the Far East Plaza off Broadway, has fond food memories of Chinatown. Certainly, he remembers the Chinatown of his youth, with its colorful sights and vibrant sounds. But it’s really the glistening roasted ducks, plump dumplings, and greasy chow fun that make his reverie so very scrumptious.

Chego!’s shiny new storefront is a far cry from its former nondescript Palms address. Surrounded by old school noodle joints, pho houses, and seafood spots, you can practically make out the tinny tunes played by an old, scraggly bearded guy who hypnotically plucks at a ruan. Chego!, on the other hand, is the new kid on the block, blaring dubstep until 11 p.m.

Fans will be delighted that their favorites, including the Chubby Pork Belly, The Beefy T, and Tiny’s Prime Rib Rice Plate, are all being served here. And though noodles are on the menu as well, Choi isn’t here to compete with the existing Chinatown businesses. He wants to fit in, be accepted, and, most importantly, add value to an entrenched part of historic Los Angeles.

A new Chego! bowl is breathing a breath of kimchi coated air into the Far East Plaza. The vegetarian Kung Pau Noodle Bowl takes its noodles on a ride. The jjamppong noodle―a carb traditionally swimming in Korean spicy soup―is stir-fried here with a paste of garlic and soy along with formidably fiery, whole dried chilis as well as chopped fresh red chilis. Lively Thai basil and cilantro boost this bowl while fried shallots and peanut crumbles bring texture and smokiness. Of course, there’s the signature fried egg on top of the heap. Most eggcellent!