Home Uncategorized A Bar. That Serves Candy? Oh Grow Up! 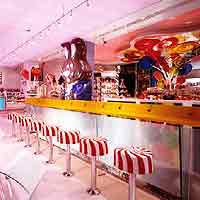 In the past few weeks, I’ve been fed so many press releases and blog posts about the September 9 opening of Dylan’s Candy Bar, I’ve practically developed Type II Diabetes. I’m all for the frenzied opening of bars, but has no one read the fine print? It’s a CANDY BAR—which, not to put a razorblade in your caramel apple, doesn’t make any sense to me. After the age of say, 12, why would an adult want to belly up to a bar that sells pounds of Jelly Bellies?

Kids, sure, let them storm the Grove like a scene from Charlie and The Chocolate Factory. But for those who haven’t played Wiffle ball or yelled, “I called it!” in over two decades, stand back. The pleasure of adulthood is doing, seeing, and consuming things that we were not allowed as children. Like, say, scotch. With that, a crucial step in adulthood is letting go of things we enjoyed as children. Like, say, butterscotch. You’ve had plenty of licorice in your lifetime already, so what about Laphroaig? (If you don’t drink alcohol, just replace “black coffee” or “uni sushi” with any of the above.)

Of course it’s not for someone named Candy to say you can’t enjoy a few gummy worms. But this over-18 sugar rush is will eventually make you look like a sucker.