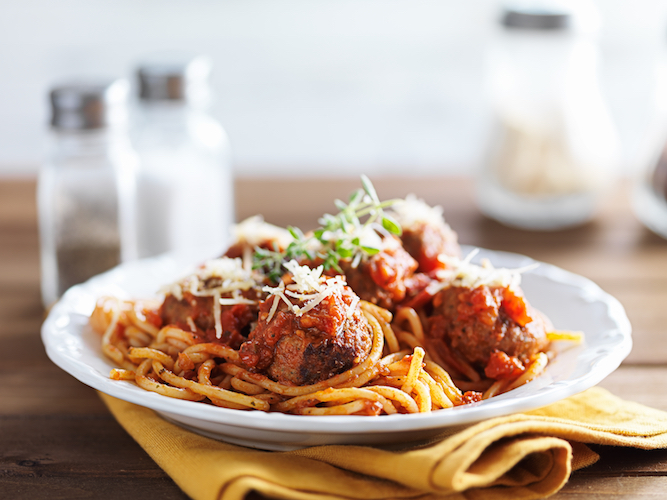 Red sauce Italian is sort of like crunchy tacos—both are not-so-authentic, both involve a lot of cheese that probably shouldn’t be there, and both are the object of our sick, lusty obsession. Red Sauce Italian gets the double boost of also usually being served in places that ooze as much Goodfellas-esque atmosphere as they do rivers of mozzarella. So go ahead and ladle a big ol’ heap of Sunday Gravy directly on top of your pasta and don’t you dare mix it in. Don’t you dare. This is not that kind of place.

It’s all about la famiglia at the L.A. outpost of one of America’s oldest Italian joints. They do Sunday Gravy dinners so you know it’s legit.

The guy behind the pastrami and burgers at Oinkster also does some serious spaghetti and meatballs at his Highland Park Italian spot, Maximiliano. Who knew?

A post shared by La Dolce Vita Restaurant (@ladolcevitabeverlyhills) on Feb 6, 2016 at 10:10am PST

It’s all about the red leather booths, amirite? Sinatra apparently ate here, and the man knew Italian—almost as well as he knew Jack Daniels.

From Puttanesca to Primavera, the menu at this Northridge pizzeria, open since 1958, is the real deal.

If the tables are booked at this Los Feliz institution, owner Tony might offer a glass of chianti to ease the wait. It doesn’t get much more Italian than that.

The seafood pasta is grand, but we could eat a pile of C and O’s garlic knots the size of Mt. Wilson.

It feels like Goodfellas in here every night. Zucchini sticks fresh out of the fire, red vinyl booths, live music, and a heap of regulars.

Mama T.’s chicken parm is NO JOKE, guys. Neither is the bolognese.

What Makes the Bolognese Sauce at Rossoblu So Good?