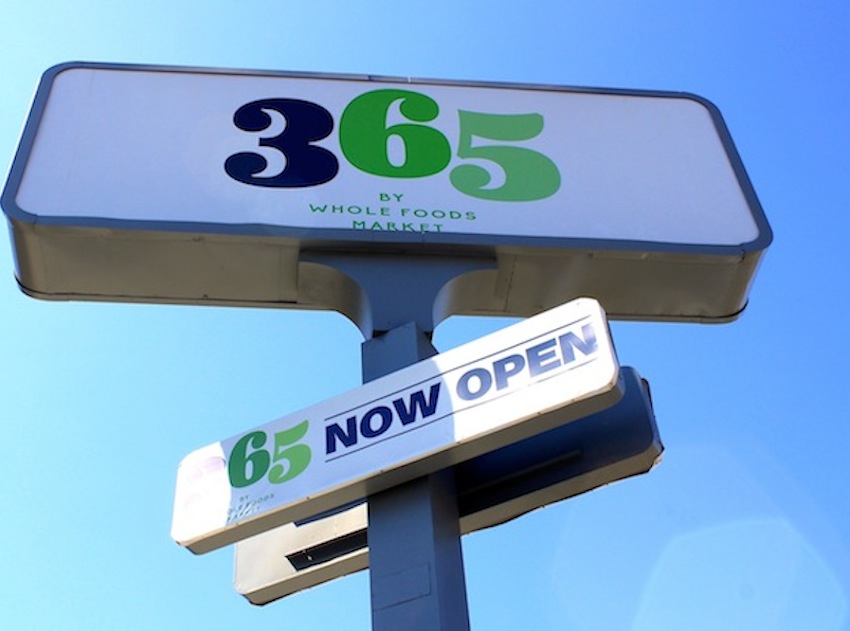 If you live in L.A. and you’re obsessed with food, you’ve likely checked out the much-hyped 365 by Whole Foods concept store in Silver Lake. Maybe you think the wild Coho salmon is a steal, the produce is top-notch, and the teaBOT is the way of the future. But no matter how much you adore the place, there’s a smarter way to shop at 365 by Whole Foods. Here are eight hacks to help you save a cartload of money, navigate the aisles and check-out lines, and pick out wine like a sommelier.

Get the Most Bang For Your Buck at the Salad Bar

We’ve all been there: You’re starving and decide to hit the Whole Foods salad bar. You load your small container up with beets, chicken, beans, hummus, and tomatoes, only to weigh it at the register and realize you’re paying more than you would if you’d ordered a giant portion at a restaurant. But unlike at the regular Whole Foods, the salad bar at 365 charges by container size, not by weight — which is a total game-changer if you know how what to stock up on. Our recommendation? Fill a small-size container ($5.50) to the brim with dense, expensive ingredients you can use as accoutrements in a salad: white meat chicken, hard-boiled eggs, blue cheese, dolmas, falafel, corn, tomatoes, and artichoke hearts. Buy the lettuce separately (a bunch of organic Tuscan kale will set you back just $1.75), and simply toss in your toppings for a hearty salad you can make at home — for a fraction of the cost.

Get a Better Bargain in the Booze Aisle

The vast majority of the roughly 400 wines stocked at 365 retail for $20 or less, which is great for your wallet, but it doesn’t always mean you’re scoring a great bargain in the true sense of the word. To find out which brands you’ll find for cheaper at 365 than you will at other supermarkets and liquor stores, we crunched the numbers (and compared them with nearby retailers) to bring you the specific bottles and six packs with the most savings:

Score 10% Off Deals at the Ends of the Aisles

At any given time, there are eight “Gimme 10” deals placed towards the ends of the aisles throughout the store. When you see something that says “Gimme 10,” that means the item is 10% off that week — and yes, you should probably grab one. During a recent visit, Stumptown coffee beans, Tate’s Cookies and Anderson Valley Briney Melon Gose were discounted by 10%. A pack of those Tate’s Cookies, for example, totaled $3.59 with the discount — which is a steal when compared to the $4.99 price tag at Gelson’s just down the street.

Save Money by Skipping the Scales

When you buy a nectarine that’s priced per pound, you don’t know if it’s going to cost you 50 cents or $2.00 until you prop it on the scale for a moment of truth. At 365, you get to skip the what-is-the-weight-of-my-fruit guessing game, given that the produce is priced per quantity. So if you buy just one juicy nectarine, it’s going to cost you the advertised price, regardless of its size or weight — which means you’ll probably save money and be less likely to waste food, especially if you don’t have a huge household to feed.

Take Advantage of the Digital Sommelier

365 by Whole Foods has been touting its use of Delectable’s offshoot app called Banquet since it opened back in May, so there’s a good chance you already know about its in-store tablet kiosks, which ring up ratings, reviews, and tasting notes of the wine on the shelves. What you might not know is that those same tablet kiosks can also help you plan food pairings for the bottle of wine (or beer) in question. Scan a bottle of $19.99 Whispering Angel Rose at the kiosk, for example, and you’ll discover it has hints of ripe red berries and apricot and it pairs nicely with grilled salmon.

Find Specialty Items on the Cheap

If you’re shopping at Whole Foods, chances are, you’re no stranger to kombucha and extra-luxe sheep milk yogurt. Luckily for you, 365 sells some of your favorite high-end specialty items (as well as some every day groceries) at a lower cost than many other retailers in Los Angeles. Based on our own strenuous but highly un-scientific comparison of nearby grocery stores, here’s a list of the specific specialty products that 365 offers at a significant discount:

Go Shopping While Everyone Else is at Work

The store is practically a mob scene between 4 p.m. and 7 p.m. on weekdays, and pretty much around the clock on Saturday and Sunday. If you have the option to go mid-day on a weekday, do it. You won’t have to weave your way through aisles packed with carts and people, and you’ll glide right up to the front of the checkout line. If you’re not a writer, actor or yoga instructor — in other words, you have a full-time office job and can’t go grocery shopping at 2pm on a Wednesday — wait until after 7 p.m. to scope out the store.

But If You’re Willing to Go When It’s Busy, Go During Happy Hour

If you must go during rush hour at the 365, do yourself a favor and at least go during happy hour — which is technically two full hours of boozy grocery shopping. Every day from 5 p.m. to 7 p.m., beer is $5 and wine is $6 at the 365 coffee and craft beer bar. The three rotating beers on tap are typically local brews like Ballast Point Pineapple Sculpin and Stone Imperial Russian Stout.