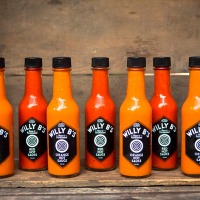 As the hometown of two of the nation’s most beloved hot sauces—Sriracha and Tapatío—Los Angeles is already known as a fire-loving city. But the masochism doesn’t stop there. We’ve rounded up seven stellar locally-made hot sauces that offer both heat and flavor, enough to keep your tongue tantalized and your forehead moist for the rest of the week.

3. Gindo’s Spice of Life
Bold but not overpowering, this habanero-powered elixir features a tangy and complex flavor (it’s seasoned with Himalayan and black lava salts) that has made it a favorite amongst local chefs. Michael Voltaggio splashes it on sandwiches at Ink.sack, while ChocoChicken uses it for their “Bee Sting” honey sauce. Creator Chris Grinder, who developed the sauce while working as an Umami Burger bartender, partnered with the Umami Restaurant Group in 2010 to take Gindo’s mainstream. You’ll find it online or at these local stores.

4. All Good Sauce
Made with mango, vinegar, and habanero peppers, this all-natural hot sauce has a tropical flair that makes it work wonderfully with everything from jerk chicken to tequila cocktails. It comes in a rather dainty looking medicine bottle, which is probably good, since you don’t need much to capture the fresh, intense sensation of ripe habaneros. Find it online or at Urban Radish.

5. Chichen Itza’s Habanero Hot Sauce
What is Chichen Itza’s cochinita pibil without a dab of their famed habanero salsa This popular Yucatan restaurant in South L.A. sells it’s incendiary habanero salsa by the bottle, which delivers the fiery heat you’d expect along with a burst of fresh citrus flavor. Find it at the restaurant counter, along with a roasted habanero version called chile kut.

6. All Spice Café
Mustachioed maestro J.D. Cowles is the O.G. of local gourmet hot sauce. His Venice-based company has been producing tantalizing flavors like Chipotle-Garlic (great on burritos) and Cayenne-Habanero (mix it with ranch dressing) since 2006. We even named him “Best Hot Sauce Maker” in 2008. Find his sauces online or at local Whole Foods.

7. Gringo Bandito
Dexter Holland, frontman for the Huntington Beach band The Offspring (remember them?), launched his own hot sauce line almost 10 years ago, amongst a rash of other musician-endorsed hot sauces (Lynrd Skynrd and Van Halen included). Unlike those others ones, though, Gringo Bandito became a smash hit. The sauce, which some fans compare to a more flavorful version of Cholula, is now available at numerous SoCal grocery chains as well as online.