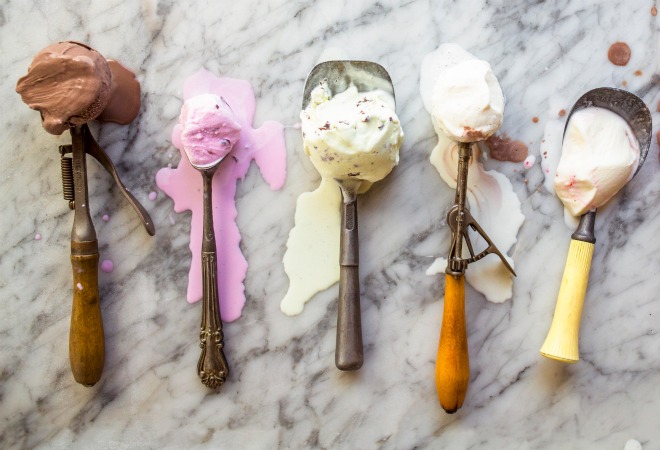 The shop is now scooping 16 flavors of seasonal ice cream, many made with local ingredients—including summer fruit cobbler, Turkish coffee, and double peanut butter chip—as well as whipping up sundaes, shakes, and ice cream sandwiches made with fresh-baked cookies.

For owner Michael Palmer, a Hancock Park-born winemaker who purchased the company in 2012, the move to L.A. has been the culmination of a longtime goal.

“While McConnell’s was founded on the Central Coast, Los Angeles is a huge part of our history as both a family and as a dairy and ice cream company,” he says. “At our height in the mid-1950s, The Old Dairy (McConnell’s) distributed ice cream—and all dairy products, for that matter—from north of Santa Barbara, all the way down into L.A. And at points during that time, we actually had some licensed stores in the city. So, this first move into L.A. is very much a homecoming.”

Unlike many local ice cream operations, McConnell’s makes their own ice cream base from scratch using milk from grass-fed Central Coast cows raised on their own dairy farm. Made from raw milk and cream, cage-free organic eggs, and cane sugar, their flavors are about as pure as ice cream can get. If you’re looking to cool off this week, here are six treats on the Grand Central Market menu worth sampling.

2.  Earl Grey Tea Float ($6.50)
Coffee floats are getting all the attention these days, but why not tea? Strongly-steeped, chilled Earl Grey tea is topped with your choice of ice cream—might we recommend Eureka lemon and marionberry—to create this refreshing summer beverage.

3. PB & J Sundae ($6.75)
The gooey base layer of this sundae starts with dark chocolate-raspberry brownies, which are then topped with scoops raspberry and milk chocolate ice cream and drizzled with molten peanut butter sauce. A far cry from what used to come in your grade-school lunch bag.

4. Breakfast of Champions Shake ($8)
Does this shake count as breakfast? It’s made with sweet cream ice cream, cornflake-steeped milk, a showering of crunchy cornflake crumbles, and a tower of whipped cream on top.

6. Santa Barberry Shake ($8)
Not your average strawberry milkshake. Made with local strawberries, McConnell’s strawberry ice cream gets brightened with rhubarb compote to create a sweet-tart milkshake that’s perfect for a heat wave.