Home Uncategorized 50 Years of L.A. Eats (For Little Old Us? You Shouldn’t Have!) 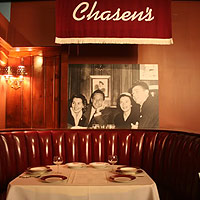 Share
Email
Facebook
Twitter
Pinterest
ReddIt
Weeeeeeee’re 50! Fifty years old! To celebrate, Los Angeles magazine is throwing a little fête tomorrow for a few close friends. Invite or no (it must have gotten lost in the mail—we swear), you can virtually party-crash with a peek at the hors d’oeuvres menu by Rivera/Playa chef John Sedlar. It’s a tribute to 50 years of L.A. cuisine, with the Latin chef’s interpretations of L.A. classics like the chili from Chasen’s, the Cobb from the Brown Derby, and—skipping ahead a bit—a bacon-chocolate dessert à la Animal. See the whole menu below. We’ll fill you in on all the tastiest moments on Thursday!

Chasen’s         Chili
Los Angeles elevates the common man’s food to a new kind of haute cuisine, from a bowl of red to gourmet pizzas to burgers with foie gras.

L’Ermitage        Moularde Duck Carpaccio
The late Jean Bertranou introduces Nouvelle Cuisine to the city, with other standard bearers of high-end French including La Toque and Patina.

Saint Estèphe    Pastrami Tacos
In the city where Mexican food was first defined by the likes of El Coyote and El Torito, New Latin Cuisine breaks out, continuing today from Loteria to Guelaguetza, Rivera to Playa.

Trumps        Plantains with Caviar
L.A. restaurants including Trumps, Michael’s, Spago, and Campanile played as great a role in pioneering California cuisine as did those in the Bay Area.