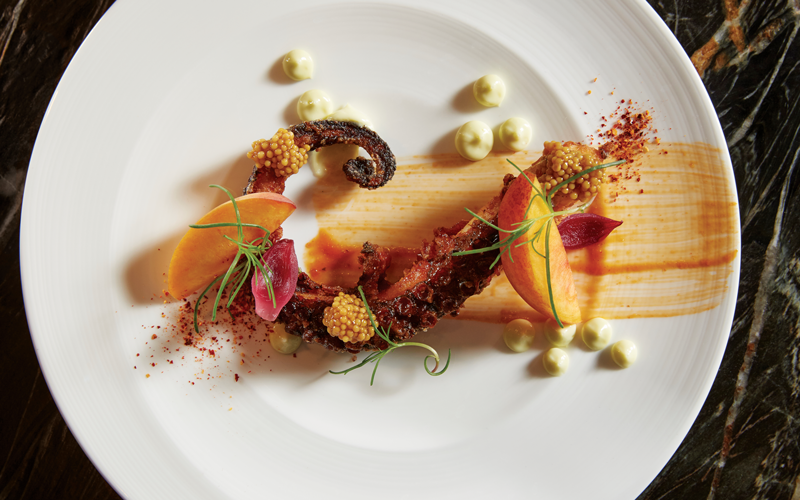 To access 71 Above on the 71st floor of the US Bank Tower—what was until recently L.A.’s tallest building—you must switch elevators on the 54th floor. The last leg is a whir of speed that deposits you in a space that’s all polished wood and well-stocked wine rooms beneath a crazy honeycomb ceiling. It could be any sleek contemporary restaurant but for the views: Gazing through the electrochromatic glass (its tint can be modified) at the glittering spread of L.A., you half expect to be told to straighten your seat back instead of being welcomed to sit down.

Calvin Trillin once suggested that the higher up you dine, the less successful a meal will be, but he was writing about the rotating building-crowning redoubts where Continental Cuisine staged its last stand in the mid-’70s. At 71 Above the Little Gems are charred and the caramelized pork belly reclines on a brothy sofrito as chef Vartan Abgaryan buffs the on-point style he last showcased at Cliff’s Edge in Silver Lake. The cooking is deeply seasonal: Summer’s strawberry gazpacho teased with shiso gives way to skin-on parsnips cooked in duck fat with slivered Medjool dates.

Just as powerful are the personal notes that the 34-year-old (born in Armenia’s capital, Yerevan, and raised in North Hollywood) slips into his cooking. The pleasingly bitter sumac dressing over an appetizer of warm squash laid out as a pinwheel recalls the seasoning of your go-to kabob joint. A scoop of wild bay ice cream with batons of pickled rhubarb demonstrates how pastry chef Gregory Baumgartner brings a smart, foraged hominess to desserts.

Most impressive is the kitchen’s subtle elegance. Abgaryan once worked at Lutèce Las Vegas, and the careful way a lustrous chicken jus is spooned over a foie gras-filled chicken breast acknowledges that there’s something “special occasion” about a place where you can pick out Anaheim, Glendale, and Malibu from your seat 950 feet above L.A. –Patric Kuh

Akasha Richmond’s Indian restaurant Sambar, which got love from critics but never quite found its audience in Downtown Culver City, is now AR Cucina, your friendly, neighborhood Italian joint. The menu is all thoughtfulness, no pretension. You can get fritto misto, or cacio e pepe, or eggplant parm, or a fantastic lasagna verde filled with braised short rib, mushroom and prosciutto ragù, fonduta, and reggiano. It’s an intensely delicious combo of complexity and comfort. Don’t skip the pre-dinner Negroni. –Josh Scherer

Figueroa Street  is on fire. That’s where Cafe Birdie has landed, with its bistro vibe and seven-ingredient cocktails. The menu of mostly Cal-Med small plates—pork collar with salsa verde, fresh pastas with meaty ragù—also includes several toasts, which sound prosaic yet taste compelling, such as the one with tuna conserva and clams. –Betty Hallock

A seafood spot from Tim Carey and Santos Uy (Papilles) is breathing some new life into Old Pasadena. Diners nurse wines by the glass and dip into sweet corn velouté. Dishes like snapper with tarragon fumet lean toward classic French, but there are several nods to Mexican cuisine, among them mole verde with big-eye tuna. As long as the kitchen and service staff hit their stride, Pasadena has a good one. –J.S.

At this indoor-outdoor daytime spot (named after a comet), Jordan Kahn stamps a Nordic aesthetic on his vegetable-forward California café menu. This is lunch: delicately roasted tomatoes and halved gooseberries in a shallow pool of kefir and roasted kale oil; avocado wedges rolled in toasted seeds and nuts and separated by sorrel leaves; or a stack of fried cheese dumplings garnished with pea tips and tendrils. Throw in an ambient soundtrack and a whitewashed open kitchen, and the effect is otherworldly. –Betty Hallock