Home Dining 14 Sandwiches in L.A. That You Need to Eat Before You Die 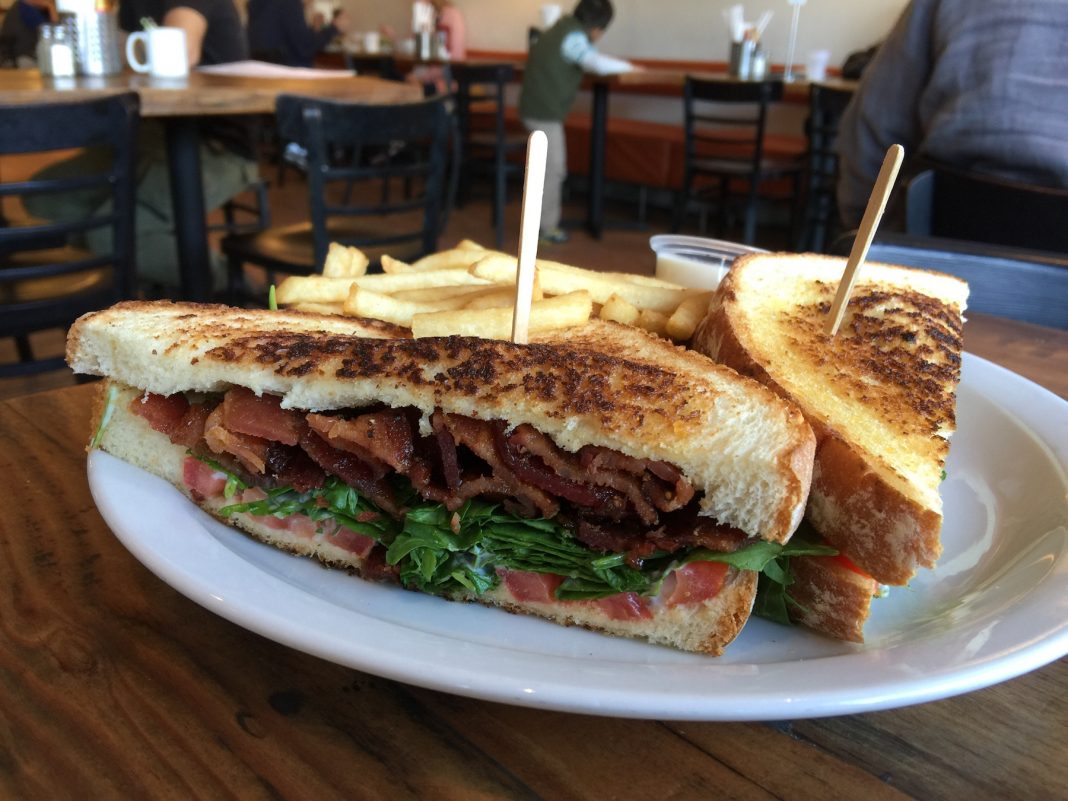 Nothing says “I’ve conquered death” like consuming every nutrient necessary to sustain life with one hand. It’s power. It’s satiety. It’s sandwiches. And everything—that’s hyperbole, let’s say 95% of things—tastes better in between bread, preferably slathered in mayonnaise or other mayonnaise-based sauce. L.A. is full of phenomenal sandwiches, but eating all of them would be impossible, what with the Angel of Death fast approaching and all, so we broke it down to the 14 you need to eat before the big day.

(Multiple disclaimers: 1. There are other sandwiches in L.A. that you should eat before you die, but you’ve probably already eaten them, so we didn’t bother. Beef Dip at Philippe’s (not Cole’s… never Cole’s), #19 at Langer’s, Bacon Egg and Cheese at Eggslut, etc. 2. Though hamburgers, hot dogs, sausage sandwiches, pitas, and fried chicken sandwiches are undoubtedly sandwiches, they have been left off this list. They will likely have their own, more specific lists soon.)

Beef on Weck from Top Round

And you thought Buffalo was only know for wings, crushingly mediocre sports teams, and Bruce Almighty. How wrong you were. This artisanal answer to Arby’s serves up a Buffalo specialty that consists of a mound of rare roast beef and atomic horseradish served on a roll dusted with caraway and coarse salt. It hits all the notes you want from a great roast beef sandwich with that added fragrant funk from the caraway on the bun.

The Con Culo! from the Crispy Cuban

There’s absolutely nothing wrong with a fantastic cubano—that classic combo of roast pork, ham, swiss, pickles, and mustard on an aggressively griddled Cuban baguette. But that doesn’t mean it can’t be improved on. And sometimes improvements can be as simple as adding a nest of juicy braised ropa vieja and some pastrami. We see you, Crispy Cuban.

“Torta ahogada” literally translates to “drowned sandwich.” Anytime you see the adjective “drowned” used to describe a food, you should definitely order that food. That’s a no-brainer. In this case, a sturdy sourdough roll from Guadalajara called pan salado gets stuffed with carnitas and buche (pork esophagus) and drowned in a chile de arbol salsa. And then you drown in pork-and-chile-induced ecstasy.

You know how sometimes you can’t choose between a brain sandwich or a tongue sandwich and so you just stand in line being tortured by indecision for 15 minutes before walking out of the restaurant? Happens all the time. Attari Sandwich Shop in Westwood solved this problem by putting both in the same sandwich, and we will be forever grateful. The sweet, creamy brain is balanced by the acid and crunch of some obscenely thick pickle slices and there’s an undercurrent of beefy, game-y tongue flavor pulling you through the whole sandwich.

RELATED: Inside the Gentrification of Grand Central Market

Because surf & turf doesn’t always have to be served on on a white tablecloth (or in a six-person vinyl booth if you’re at Sizzler). Orleans & York makes some of the best po’ boys in the city, and all of them are fantastic, but best in show goes to the Big Mo with its smoked beef hot links and fried shrimp. It has that same one-two punch of of spicy cured meat and shellfish that you get in a good pot of shrimp gumbo, except it’s in a sandwich, which is the best way to experience food.

OK, OK, OK, hear us out. This is less about tuna salad the food, and more about tuna salad the idea. Most people swear by The Godmother, which is an otherworldly sandwich, but its only unique ingredients are collection of Boar’s Head deli meats, which are used in grocery store delis across America. That means you could stuff literally anything into that insanely crackly, chewy bread, slap some Italian dressing and pickled hot peppers on it, and it’s going to be phenomenal. You can get a great salumi sandwich at tons of places in L.A., but how often do you really get to experience an old-school mayonnaise-y tuna salad sandwich on this level? (Honorable mentions include: eggplant Parmesan and literally every other sandwich on the menu.)

The San Gabriel Valley is full of fantastic banh mi, but if I had to pick one to eat for the rest of my life (really hope that doesn’t happen though, that would be a major buzzkill) it would have to be the #2 Special at Ba Le. Light and crispy baguettes are baked in-house every day and they get filled with pate, cured pork, and an emulsified pork sausage called cha lua, along with pickled daikon, carrot, cilantro, jalapeño, and all the other essential banh mi bits. I get mine without cucumber, because cucumber is a bad vegetable.

It must be on a baguette, and it must have extra spread. Those are the (arbitrary albeit extremely necessary) rules. We didn’t make them up (we did), we just enforce them (we don’t). Everyone needs to have a great turkey go-to, and with their super chewy bread, tangy sun-dried tomato spread, and spritzing of sweet balsamic, the version at Larchmont will quench your classic sandwich thirst.

You could write off Fat Sal’s as being an over-the-top stoner’s paradise and a token of our collective dietary moral decline, and you wouldn’t be totally wrong to do so. But that would miss the objective deliciousness and culinarily sound nuance underscoring their best dishes. Take the fat Jaime, for instance. A base of fried chicken strips, grilled ham, and melted mozzarella is countered by the freshness of cool avocado, lettuce, pico de gallo, and lime juice, and then punched up by the heat of Tapatio and grilled jalapeños. Oh and there’s also a bunch of french fries in it, because why not? It’s like a stoney-riffic, L.A.-centric answer to chicken cordon bleu, and it’s fantastic.

What do you get when you stuff the city’s best barbecue brisket into a buttery soft challah roll? You get the city’s best barbecue sandwich. That’s just basic sandwich math. (Honorable mention: Hey, while we’re at Maple Block talking about sandwiches, you should really try their pimento cheese on white bread. It’s all processed salt and squish but in the best way possible.)

Egg salad is egg salad is egg salad, except that’s not true at all and you’re a reductive monster for thinking that. Some egg salads are better than others, and Europane’s is the best. Instead of fully cooked and fully chalky egg yolks, this Pasadena bakery uses soft-boiled eggs, creating a silken mixture of runny yolk and mayonnaise that’s set upon a schmear of sun-dried tomato pesto and a brick of rosemary-currant bread before being topped with arugula. It’s served open-faced, and I ethically disagree with open-faced sandwiches operating in the same space as real sandwiches, so please do me a solid and flip the two halves on top of each other and eat it with your hands.

Dune has fantastic falafel—maybe the best in the city—but there’s another vegetarian sandwich that’s equally delicious and more unique, giving it the edge in terms of eating things before your consciousness fades and the world turns black. Bub and Grandma’s ciabatta is slathered in a garlicky paste called toum and then the fun gets going with pickled beets, capers, a fudgy soft-boiled egg, kalamata olives, and crispy shoestring potato bits. Probably grab a falafel sandwich while you’re there too, seeing as the end is near and all.

Bagel with Pastrami Lox From Wexler’s

Wexler’s continues to fight the good fight in convincing New Yorkers that L.A. can be—and currently might be—a bagel and cured fish town. Not that we need their approval anyways (we totally do). The lox pastrami is all pepper-crusted fishy deliciousness.

No one should ever have to bury their favorite sandwich. But I did. The Pho Baguette, a fusiony of-the-moment answer to the French Dip, a reverent mashup of a braised brisket banh mi with a sidecar of reduced pho broth for dipping, returned to the earth when East Borough closed its doors for good in August. Sure, I could always just drive down to the Costa Mesa location and get one, but driving 30 miles on the 405 is worse than death. Requiescat in pace, Pho Baguette.

Josh Scherer is the Senior Food Writer at Los Angeles magazine. You can follow him on Twitter and Instagram @CulinaryBroDown. He has an unhealthy obsession with Taco Bell.