Home Uncategorized 10 Places Rob Ford Should Check the Next Time He’s in L.A. 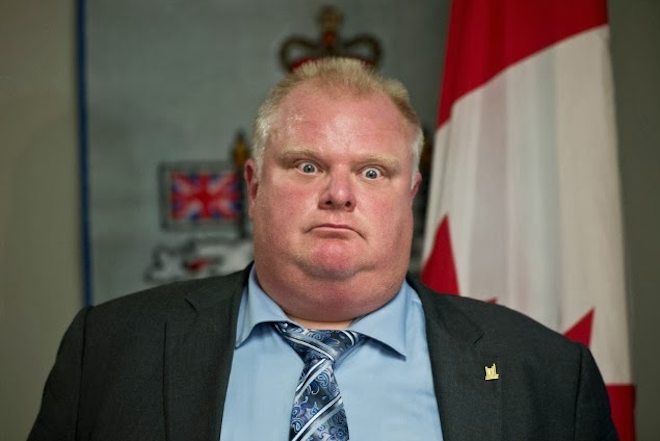 There are a lot of photos of Toronto mayor Rob Ford online. Almost none of them are flattering.

Have you heard? Toronto’s (alleged) crack-smoking mayor Rob Ford was just in L.A. making the rounds. He stopped at City Hall and taped a spot on Jimmy Kimmel’s show. But a man like Ford must like to get out from time to time. Here’s a list of places that may just be up his alley, from scandalous nightclubs to late-night dives, our city has it all.*

King Eddy’s: An L.A. institution at the doorstep of Skid Row where Rob can blend in with the crowd and buy rounds of Jack Daniels for all his new buddies.

Hakkasan Beverly Hills: Perhaps he’d like to rub elbows with our hometown whales in a Vegas-like setting?

The Penthouse at Mastro’s: All the mayors are doing it. They’ve got porterhouse steak, they’ve got vodka.

Honeycut: Imagine Ford getting down on that dance floor. And he’d love the cocktails—on tap for immediate liquid satisfaction.

Hooray Henry’s: If Rob wants to roll big at this London-inspired nightclub, he can order up the $50K King Package which gets him two Grey Goose Magnums, several bottles of Ace of Spades and a caricature on their wall, extending his 15 minutes.

Max Karaoke Studio: Since he enjoys singing and dancing during city council meetings he’d love this karaoke spot where he can take command of the mic a la Bob Marley late into the night (til 4 a.m. on Fridays and Saturdays). Bonus, he could bring his own food and (nonalcoholic) drinks.

Jumbo’s Clown Room: At the end of the night, all roads lead to Jumbo’s.

Sunny Spot: With his flair for patois, we figure Rob would be down for some tasty Caribbean fare courtesy of L.A.’s munchies expert Roy Choi. Plus? This Marina Del Rey spot has a killer bottomless brunch—ideal for the morning after.