Home Essays During Quarantine, a Zoom Writers’ Room Became My Connection to the Outside... 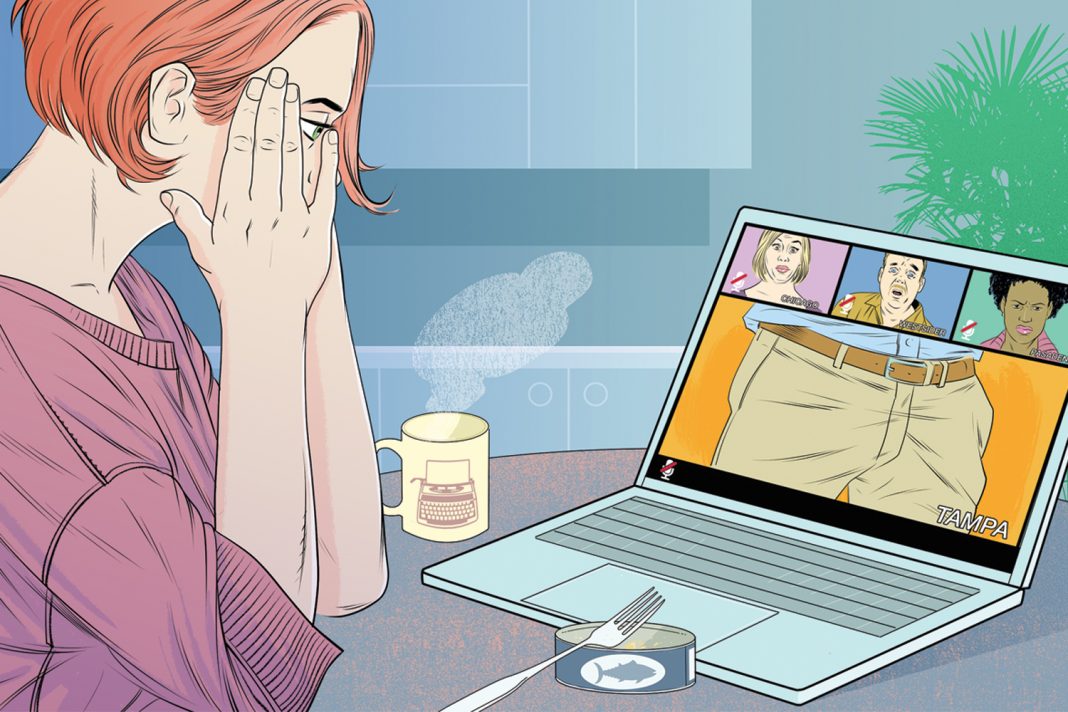 I’d been on social media, scrolling past heaping homemade family meals of risotto ai funghi and strawberry rhubarb tarts, while I hunched over my kitchen sink eating tuna straight out of a can. I’d always feared it might come to this: I was becoming Blanche DuBois. A Streetcar Named Desire ends with Blanche—unmarried, financially insecure, beauty fading, and, horror of horror, dependent on the kindness of strangers—unceremoniously carted off to the loony bin. Clearly, I was headed in that direction.

An empty nester in the midst of a destabilizing divorce, I’d been feeling upbeat about keeping my inner Blanche at bay. I was taking in boarders to meet my monthly nut, volunteering at the local high school, busy with freelance work, and hiking daily with a friend. I had a desk in a shared workspace that provided me with watercooler camaraderie.

In a matter of days, my tenant had hightailed it home, gigs evaporated, the office space shuttered, and my hiking buddy started running a little house on the quarantine for her five young children. My own kid, a college senior (preferred pronouns: they, them, theirs), was sheltering in place near their campus on the East Coast. Alone, distracted, untethered to a daily schedule, I found time was folding into itself. Writing complete sentences seemed a Sisyphean task.

In a manic panic, I fired off an impromptu email to 180 or so writers, some I hadn’t spoken to in years, others with whom I had even more tenuous connections, to join me for three hours of writing together over Zoom. I imagined something like the festive bustling green room of the Los Angeles Times Festival of Books, but that’s not quite what I got.

I changed out of my night pajamas and into my day pajamas and opened my Zoom session expecting to find dozens of writers stationed at their desks. Five showed up. There was one stranger, three acquaintances, and a Westside comedy writer friend I hadn’t seen in ages because I live on the Eastside and this is L.A.

I laid out informal rules of engagement for what I hoped would become a productive writing session. After chatting for 15 minutes or so, we’d mute ourselves, write for 90 minutes, break for a chat, and write again for 90 minutes. Fifteen minutes turns out to be an interminable length of time in live cyberspace with veritable virtual strangers, and we began writing after just five minutes.

The Westsider kept us entertained with Zoom green screen globe-trotting, which seemed novel at the time. One minute, he was writing in front of the Eiffel Tower (OMG!), the next, on the Golden Gate Bridge (hilarious!), and finally, in a Trader Joe’s aisle lined with empty shelves (funny and uncomfortably close to home).

When I was able to tear myself away from the crepey way my neck looked onscreen, I stole glances at the others, delighting in seeing living people. For the first time in a week,
I was able to resist Googling “where’s Dr. Fauci?” every ten minutes. I dashed off haphazard invitations for the next day over email and on social media.

Two returning writers and three I’d never met—one from Tampa, one from Chicago, and another Westsider—materialized at the appointed time. Dispensing with the chat altogether, we muted ourselves and got to work.

Chicago was seated on a twin bed in a child’s bedroom, and every so often a spritely girl, maybe 7 in age, swooped in for a hug and skipped away. This simple interaction elicited what I can only describe as a Handmaid’s Tale heart-wrenching response. A child! Do we still have those?

During those dull, aching hours of writing, our expressions varied between looking like we were suffering gastric distress, had just learned that our IRAs had tanked, or were experiencing the sort of blankness you see in dementia patients.

Sometimes a quizzical look would pass over someone’s face. Only later did I realize that the whiteboard in my office was visible behind me. It read: dry vagina, divorce, cat lady.

Westsider sent me a message: “It feels a little weird having cameras on, but it’s also comforting. I’m sure once I get to know everyone I’ll be even more comfortable.”

I didn’t have the heart to tell her how much I was hoping to not get to know anyone. My daily check-ins with friends and family were essential, but also emotionally fraught reminders of my isolation. The anonymity but intentionality of our intimate vacuum proved a salve, our silent transactions buoying my spirits as if surfing the energy of a crowded street.

I was the only writer to sign on. For a moment, I felt the relief of a grade school snow day reprieve. I was tempted to sign off and break into my stash of dark chocolate with sea salt, but on the off chance that someone might turn up, I reprimanded myself to “Go to your Zoom and don’t come out until you’ve gotten something accomplished!” Thankfully, Tampa, another Chicagoan, a newbie from Pasadena, and two new Westsiders trickled in. One of the last, an inveterate café-writer from Topanga, wrote into the chat, “Being able to see your names on the screen means I already knew more about you than I’d know about the people sitting around me in a Starbucks.” Before making a bathroom run, Pasadena couldn’t resist inquiring, “Will you be here for a little while? Would you mind watching my stuff?”

I also realized that it wasn’t just Zoom making me look jowly; the Botox had fallen out of my face and this was actually how I looked.

A strange new normal of signing on, greeting each other, and getting to work set in. I stopped bothering to put on makeup. Tampa, Chicago, a Westsider, and two newcomers from Brooklyn joined in. One of the Brooklynites asked, “What is this?” with the confused expression of someone who’d stumbled into the wrong party. But after hearing the brief rundown, they remained for the entire session and an additional hour, closing the joint down.

That night I sent a text to my kid, on a whim. “I’m all alone in the writers’ Zoom room I told you about, might you join me?” At 22, they’re in that curious individuating stage. Under normal circumstances, we rarely speak; instead, I’ll receive texts: “Can you add money in my account until my paycheck clears?” or “What do you clean piercings with?” I wasn’t even aware they had a piercing, much less five. Since college moved online, they seemed to be majoring in Rubik’s Cube and minoring in sourdough starter, so I was certain they were otherwise occupied. In what might be the most compassionate act bestowed on me as a mother, my child signed on. I didn’t mute this session. I wrote accompanied by the gentle click-clacking of the cubes sliding into place, as soothing as ASMR. It was only when I took a break from rapturously gazing up at my child—a stranger to me now—that I spotted her in another window. A young woman entered the screen and took off the majority of her clothing. We’ll never know who was more shocked, us at witnessing this striptease together, or our hapless Zoom bomber who’d gone to the trouble of plotting a disruption only to find an audience of two, a mother and her child.

I spent the early morning hours mourning my IRA, haggling with my insurance company over an outrageous medical bill, and talking with my spouse about conducting a mediation over Zoom so we could finalize our divorce during the pandemic. Oh, and I received official notice that my kid’s graduation ceremony was canceled. I also realized that it wasn’t just Zoom making me look jowly; the Botox had fallen out of my face and this was actually how I looked. I wept—more like howled—for several hours straight. If not for the possibility of a Zoomful of strangers waiting for me, I might still be howling.

“I thought there’d be hundreds of writers,” said DTLA, a new addition, upon entering and seeing only four others. “Me too. I’m going to mute you now,” I said, reveling in the modicum of control afforded a Zoom host in the midst of worldwide chaos.

The last hour of my Zooming that day, it was just Tampa and me. I don’t know anything about Tampa except that he’s a librarian who prefers writing at night, but it’s possible that during those five days I spent more time with him than I did with my ex during the last year of our marriage.

Three months into lockdown, for several hours five days a week, my virtual Zoom writers’ workroom persists. Each time I hit “end meeting for all,” I feel grateful for both the online company and the fact that in a muted Zoom, no one can hear you scream.

Annabelle Gurwitch is an actress and best-selling author. Her next collection of essays, You’re Leaving When? Adventures in Downward Mobility (Counterpoint), is out in spring 2021.

RELATED: These L.A. Zoom Backgrounds will Spice Up Even the Lamest Calls