Home Politics A Giant, Glowing Uterus Has Come to the Sunset Strip 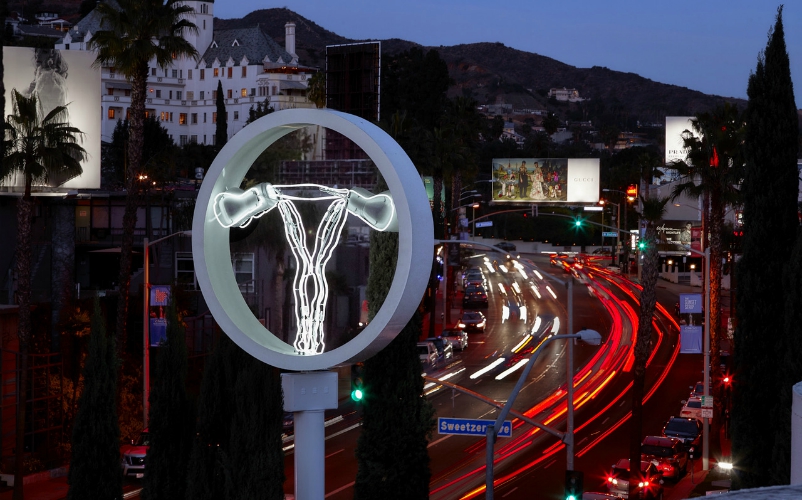 A new piece of public art in West Hollywood is coming out swinging. Artist Zoë Buckman’s work Champ depicts a neon uterus with oversized fiberglass boxing gloves in place of ovaries. The symbol of female empowerment will be unveiled Tuesday, February 27—just in time for the start of Women’s History Month—after which it will remain on the corner of Sunset and Sweetzer for one year.

Champ isn’t the first piece of Buckman’s work to include feminist themes. She was born in East London, but has lived in New York City for the past 11 years, or as she describes it, “three presidential election cycles.” She recalls that leading up to the 2016 election, she was frustrated and angered by the discourse that related to women’s bodies. She says, “I’m a Brit, so I come from a country where in the run-up to a general election, no one talks about abortion. No one starts scoring levels of rape. No one talks about curtailing a woman’s right to choice or sexual health—it’s just not a discussion. But yet, it is here, and I take it personally. This was starting up again, and so I realized I was just feeling that politically, as women, we were under threat, and that there was—and is—a war on us. There was a lot to fight for, and a lot that needed defending.”

She responded to those threats by incorporating her personal activism into her art. “I was taking metal gynecological instruments and powder-coating them in my studio, and turning these cold, harsh, metal, almost torture-device-looking pieces into something more beautiful,” she explains. One such piece, Rainbow Speculums, was on display at the Into Action exhibit in DTLA last month.

Around that time, Buckman started training at a boxing gym, which she says she found therapeutic: “The process of learning how to defend my body, how to own my space and take away space from other people, and getting me in touch with my masculine, testosterone-heavy side, from a personal development standpoint, it was really helpful to me—as well as releasing aggression and frustration.” She started boxing three or four times a week, and says, “I felt like I needed to bring that world and that iconography into the studio. The first piece that came to me was this image of this white, glowing uterus with boxing gloves for ovaries. This piece was the first time that I started marrying my feminist artwork with this very masculine boxing iconography.”

That piece, Champion, was made with actual boxing gloves, so that dictated the size of the rest of the sculpture. Champ, the new installation, is much larger, because it uses oversized boxing gloves made of fiberglass. Buckman says working with neon was a natural progression from her studies at the International Center of Photography, where she was taught to think of photography as the art of painting with light. “I wanted to take my use of light one step further and literally use light as a paintbrush. I was drawn to neon because of that quality, but then I researched it and learned how these neon signs are kind of transient. They have a shelf life, and they run out. I found that so beautiful and painful.”

She adds that she intentionally chose a warm white light for the neon uterus. “I wanted it to draw you in, and I wanted it to be empowering and healing and beautiful.”

Her piece had the desired effect. After Champion appeared in a few exhibits, photographs of it went viral thanks to women who felt a connection to the work. She says, “I’ve had women writing to me through my website from all over the world with the most diverse issues who feel encouraged, or heard, by this piece.”

The WeHo installation is presented by Art Production Fund at the Standard, Hollywood, with support by Alice + Olivia by Stacey Bendet. Jenni Boelkens, area director, design, at the Standard Hotels, says that when Casey Fremont, the executive director of Art Production Fund, approached them with the idea, they knew they wanted to help make it happen. “We thought the concept was great. We thought, juxtaposed to the rest of the billboards on the Sunset Strip, this would fit really nicely into the context of the Strip, and start a new conversation, essentially.” Champ has been in the works for more than a year, but the project feels especially timely in the wake of the #MeToo movement. Boelkens says, “We’re very excited that this is now coming to fruition, especially in light of everything that has happened over the course of this past year with respect to female equality.”

Since Champ will be on display in West Hollywood for a full year, Buckman is working with the Standard to organize a series of panel discussions that relate to the piece. Details on those events are still being confirmed, but Boelkens says the Standard is also planning to involve hotel guests in the conversation: “We’ll be putting collateral in the rooms that speaks to the piece, Zoe, and Art Production Fund, so that our guests can come in, see the work, and feel compelled to talk about it—whether they like it or not.”

Champ will be lit for the first time on Tuesday, February 27. On March 3, a solo show of Zoë Buckman’s work, entitled “Let Her Rave,” will open at the Gavlak Gallery, 1034 North Highland Ave. That exhibit will run through April 7.

RELATED: Keanu Reeves Is Publishing Books That Are Beautiful, Socially Conscious, and Worth Your Time