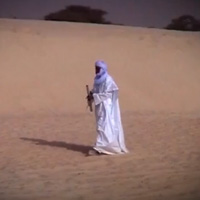 In 2003, Robert Plant travelled to the West African country of Mali to perform at Festival in the Desert, a famed annual confab created to showcase Tuareg music and other music from around the world. In Zirka, a film split into eight episodes, he documents the journey by personally filming the beauty and desolation of the landscape, street scenes, people he meets along the way, and bird’s eye views from airplanes as he made his way to and from Essakane, where the festival was held. (It later moved to Timbuktu and for the past two years has been postponed due to conflict in Northern Mali.)

Starting November 18, Plant began unveiling an episode of Zirka every Monday on his YouTube channel. Beautifully edited and without narration, they unfold as a visual journey into another world set to a hypnotic soundtrack. From the simplicity of fishermen hauling in their boats at sunset to people dancing in the street to a bizarre shrine of rifles in a barren desert, the images evoke a time and place far away from life as we know it in the West.

Much of the second episode shows magical performances at the festival itself. Plant calls the journey of music across and between cultures one of the most humbling of his life. For viewers, it’s a window into a world we would likely never see other’s. We’re looking forward to the next installment.