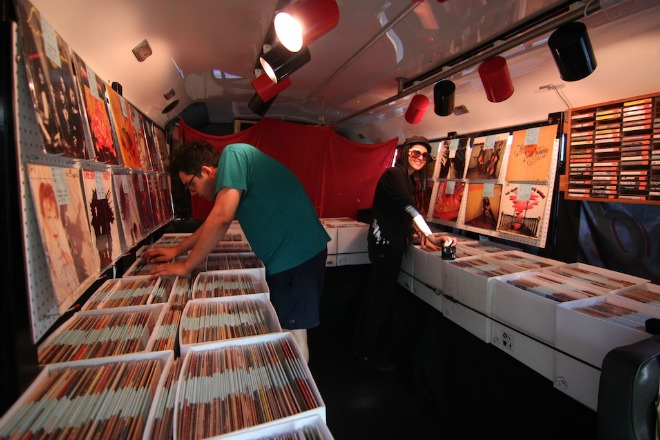 Indie record stores and the patrons who frequent them may be endangered species, but you wouldn’t know it from the hubbub surrounding Record Store Day and the passionate declamations of its offical ambassador Jack White.

In honor of the holiday, which happens tomorrow (April 20), The Record Truck (modeled after its bookish cousin) will roll up to Lot 1 Café in Echo Park. It’ll be parked ther from 10 a.m. through sundown, offering an eclectic, curated collection from founder Krk Dominguez. You can track its movements on Twitter at @LARecordTruck.

If you’re new to the world of vinyl, there are still a few brick-and-mortar shops throughout the city where you can browse LPs in the company of experts. Amoeba on Sunset Blvd. is still the go-to place, but in Highland Park there are Mount Analog and Wombleton Records, specializing in rare and “esoteric” LPs. In Echo Park you’ll find Origami and Mono Records, along with Vacation and Rockaway Records in Silver Lake, High-Fidelity in Los Feliz, Permanent Records in Eagle Rock, Touch Vinyl and Record Surplus in West L.A., Soundsations in Westchester, and punk rock specialists Headline Records in Hollywood. Further up the coast there’s Buffalo Records in Ventura.