Home Uncategorized Your Ozomatli Primer: 9 Tracks to Get you Ready for the Band’s... 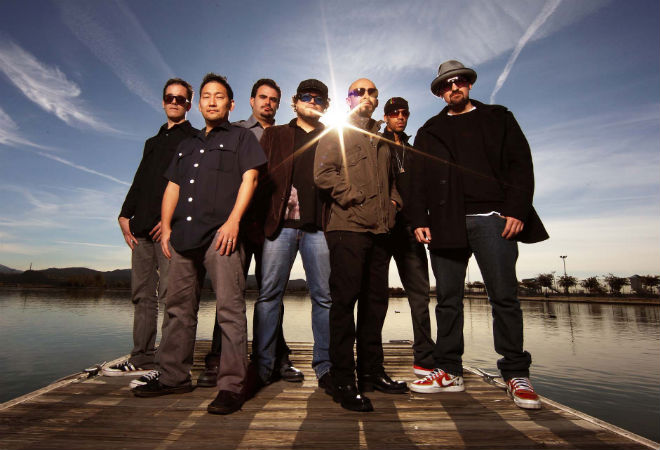 Ozomatli is the quintessential Los Angeles band, mashing up ska, hip-hop, funk, salsa, and half-a-dozen other genres to create a sound that’s joyous and danceable yet rooted in a strong political consciousness. As cultural ambassadors of the United States, they’ve undertaken State Department-funded tours of Nepal, India, Egypt, and Jordan. They’ve also partnered with the David Lynch Foundation and La Raza to promote social justice and related causes. Their ninth full-length album, Place in the Sun, drops on March 11, and we’ve compiled a list of nine must-hear tracks spanning their 19-year career.

1. “Cut Chemist Suite”
This is the song that introduced the world to Ozomatli: a fun hip-hop track that sounds like a lazy afternoon spent traveling around the Southland.

2. “Vocal Artillery”
The lead single from Ozomatli’s second album, Embrace the Chaos (which earned the band a 2002 Latin Grammy), offers more of the beats that made “Cut Chemist Suite” so memorable. Here, they take on a sharper edge and feature cameos from Medusa, will.i.am, and Kanetic Source.

4. “When I Close My Eyes”
This track from 2007’s Don’t Mess With The Dragon offers a different take on the Ozo sound, one that’s reminiscent of SoCal brethren Sublime. Put this one on when the party needs a ska and pop-punk-tinged pick-me-up.

5. “Can’t Stop The Blue”
In 2008, Ozomatli recorded this ode to the Dodgers, cementing their hometown cred. Check out the video, in which the band has a literal field day at Dodger Stadium.

6. “Gay Vatos in Love”
Subtlety has never been Ozo’s strong suit. That’s a good thing when it comes to sweet, upbeat advocacy songs like this. As the band members explain in the video, the track was inspired by the Proposition 8 protests and the 2008 murder of trans teen Angie Zapata.

7. “At the Edge of Urban Identity,” (TED x SF: Ozomatli feat. Josh Kun)
Ozomatli has the honor of being the only band ever invited to deliver a musical TED talk, which they did in partnership with USC professor (and occasional Los Angeles magazine contributor) Josh Kun. The result, at 19 minutes long, is probably the trippiest TED talk ever.

8. “Balloon Fest”
This choice cut from the group’s 2012 children’s album Ozokids offers a peek at Ozomatli’s sillier side. In the video, they get down at a playground with the help of funny hats, glasses, and a plenty of balloon animals.

9. “Brighter”
The lead single off Ozomatli’s newest album Place In The Sun is a return to the band’s roots: a reggae-infused ode to positivity enhanced by a killer horn section.