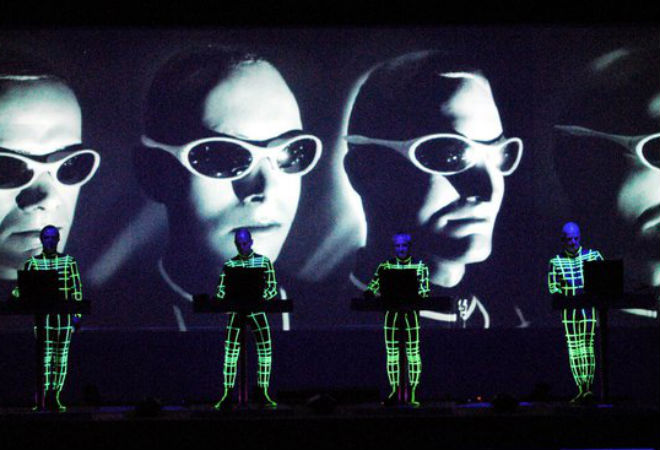 “So, Kraftwerk is playing eight shows in town this week.” It’s a sentence you’ll only hear once in your life, and that one time is now. The German band invented their own electronic sound, developed new technology such as sensor activate drum kits and advanced sequencers, and brought the word “Autobahn” into the English vocabulary. This week, the Teutonic pioneers pull off another amazing feat, performing eight separate concerts at Walt Disney Concert Hall.

Kraftwerk (German for “power plant”) was founded in the East German city of Düsseldorf in 1970 by Ralf Hütter and Florian Schneider, then students of composition at the local music conservatory. Four decades later, what started out as an experimental jam band has developed into a musical cornerstone. Kraftwerk’s streamlined industrial melodies, animated by synthesizers, vocoders, and drum machines is as iconic as their minimalist robot aesthetic.

Starting March 18, Kraftwerk will perform eight of its most beloved albums at Walt Disney Concert Hall including Autobahn, Radio-Activity, Trans-Europe Express, The Man-Machine, and Computer World, all of them accompanied by 3D videos playing behind the band. Don’t sweat it if you didn’t get a ticket. We’ve put together a Kraftwerk playlist. Turn on your strobe light, put on your robot dancing shoes, and hit the autobahn running.

1. “Ruckzuck”
Kraftwerk’s eponymous 1970 debut is a far cry from the electronic sound that the band later immortalized. The album sounds more like late ‘60s German krautrock (a term coined by British journos), which emphasized monumental jam sessions and psychedelic experimentation.

2. “Klingklang”
Kraftwerk’s second release, Kraftwerk 2 (1972), was the first album to be written and performed entirely by Hütter and Schneider. It is uncharacteristically sparse on the synthesizers. “Klingklang” is an epic 17-minute track featuring a generic organ beatbox accompanied by flutes.

3. “Ananas Symphonie”
“Ananas Symphonie” (German for “Pineapple Symphony”) is a milestone. Featured on the band’s third album, Ralf und Florian (1973), this is the first time Hütter and Schneider employed a vocoder, a synthesizer that electronically reproduces human speech. It would become a hallmark of their sound.

4. “Autobahn”
1974’s Autobahn was Kraftwerk’s commercial breakthrough, featuring more vocals than on the previous three albums. The radio-friendly three-and-a-half minute version of the title track “Autobahn,” with its catchy refrain and mechanic beat, signifies a shift from the long-winded jam sessions of previous albums to a more concise distillation of the band’s sound.

5. “Showroom Dummies”
Trans-Europe Express was recorded in 1977 and released via Kraftwerk’s own label, Kling Klang. Nowhere is the band’s fascination with industrialization and the relationship between humanity and its creations clearer than on “Showroom Dummies,” where the monotony of the repeated title phrase is punctured by an eminently danceable backbeat.

6. “Neon Lights”
The quintessential Kraftwerk album is 1978’s The Man-Machine, which sees the band establishing the central tenets of its electronic universe. Tracks like “The Robots,” “Metropolis,” and “Spacelab” are instantly recognizable for their minimalist, proto-techno melodies, but our pick for this album is “Neon Lights.” Why? Because it was Kraftwerk’s first foray into writing love songs.

7. “Tour de France”
Ralf Hütter’s love of cycling is well known. When the prestigious Tour de France celebrated its 100th anniversary in 2003, Kraftwerk released Tour de France Soundtracks featuring the single “Tour de France.” In an interview, Hütter stated that in the ‘80s he found respite from the monotony of touring by riding his bicycle up to 120 miles a day.