Home Uncategorized Your Guide to the Freaky World of Die Antwoord 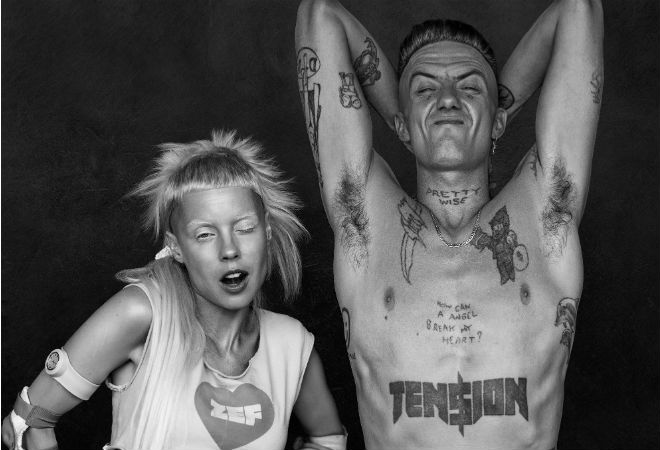 If you’ve never encountered the music of South African hip-hop group Die Antwoord, you’re in for a weird treat. The trio, which performs tonight at the Fonda Theatre in Hollywood, has been making waves with their danceable, synth driven approach to hip hop since the release of their debut album $O$ in 2009. The group’s lyrical universe as well as the handful of videos it has so far released are permeated by sinister images, Afrikaans rhymes, lots of bling, and biting social satire aimed at racism, political corruption, and the music industry itself.

Die Antwoord, which is Afrikaans for “the answer,” started in 2008 and is centered around artist couple Ninja and Yo-Landi Vi$$er, whose real names are Watkin Tudor Jones and Anri Du Toit. They mix English with Afrikaans in their lyrics, mashing up various elements of South Africa’s youth and working class cultures. The band signed with Interscope in 2010 but quickly left the record label over a dispute about a single from their then coming album Ten$ion, which was later self-released by the band. The song “Fok Julle Naaiers,” which roughly translates to “F*** all of you,” wasn’t considered radio friendly, so the band packed up their bags and returned to Cape Town.

Die Antwoord has made its mark by dominating the music video, the medium that was declared dead until YouTube revived it. Here are four of the most mind-bending clips from the South African provocateurs.

This is the song that put Die Antwoord on the map and won the band a MySpace Award (remember that site?) for best music video in 2010. The video, directed by Ninja and cinematographer Rob Malpage, also features late Cape Town artist and DJ, Leon Botha who, before his death in 2011, was also known for being one of the world’s oldest survivors of progeria, a disease that causes rapid aging.

Die Antwoord gave the record industry a middle finger salute on its 2011 sophomore album Ten$ion. Nobody rocks a Pikachu costume like Yo-Landi Vi$$er.

“Cookie Thumper” is one of Die Antwoord’s most recent efforts. The single will appear on the band’s upcoming album, Donker Mag, which is slated for release in June. The song is a not so innocent love story of a school girl’s crush on a recently released convict and drug dealer. Look for lots of references to South African prison culture as well as an ending that is definitely NSFW.

I Fink U Freeky

By far the most danceable track Die Antwoord has ever recorded, it serves up a thumping techno beat along with a visually arresting video populated with Die Antwoord’s usual group of strange-looking people. It also offers a wild and twisted peek into what might be Ninja and Yo-Landi’s home life.