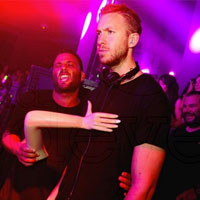 Is it Sunday already? How did I get here? And why are my shorts glowing? We can’t answer those questions, but we can tell you what bands to catch today as you sweat out last night’s bad (or good) decisions.

12:50-1:25 p.m. – Sundays are the day of rest, but this is Coachella, so grab a hair of the dog and check out J. Roddy Walston and the Business at the Outdoor Theater. The band released its last record, Essential Tremors, in 2013, and the group’s Southern-tinged rock group is a perfect way to kick-start the day.

1:45 p.m. – If your calves are burning as much as ours, you’ll want to move as little as possible. Luckily the West Palm Beach, Florida band Surfer Blood will follow J. Roddy on the Outdoor stage. The band’s sunny, surf rock embodies the essence of coastal cool.

3:10 p.m. – One of the weekend’s most buzzed about acts, Chance the Rapper, who has been making waves with two mix tapes he self-released, will make his Coachella debut on the main stage.

3:45 p.m. – Maybe you’re ready to get down. Dutch electronic duo Showtek will get you moving in Sahara.

3:55 p.m. – Head for the Gobi to see Frank Turner, the formerly lead singer of a post-hardcore band whose solo career has taken an distinctly turn. His punk roots still shine through.

5:10 p.m. – Catch ’90s indie rock kings Superchunk in the Gobi Tent. The personification of DYI, this band ignored all the rules followed by their mainstream contemporaries and built a devoted fanbase that still shows up two decades later. In a weekend that saw the return of the Replacements and Pixies, Superchunk is the proverbial icing on your indie cake.

5:40 p.m. – New Zealand’s The Naked and Famous take the main stage with their infectious melodies and propulsive electronic soundscapes. The group’s debut record, Passive Me, Aggressive You, spawned the number one single “Young Blood” and the insanely catchy, “Punching in a Dream.” Last year saw the release of In Rolling Waves. Brush up on how they made their latest album by reading our chat with bassist Aaron Short.

7:30 p.m. – Get to the main stage early, and make sure you’re stocked on glow sticks because Calvin Harris will be spinning the ones and twos. We expect some heavy names to join the British DJ as surprise guests.

8:15 p.m. – The Outdoor stage has seen its share of female vocalists this weekend with Lorde, Haim, Neko Case, and Sleigh Bells, and today it’ll feature Lana Del Rey. Since her 2011 debut, she has been critically hailed and derided in equal measure, but it seems that no one can stop talking about her. Check out the sultry crooner and decide for yourself.

8:55 p.m. – From his breakthrough 1993 hit “Loser” to his latest album, Morning Phase, Beck has never been a musician who fits easily in a single genre. His experimental, lo-fi sound paired with his quirky persona make him the perfect fit for the Coachella main stage.

9:35 p.m. – If you’ve heard all your Beck favorites, hop over to catch Grammy-nominated duo Disclosure headlining the Outdoor stage. The British electronic act had a huge year in 2013, capped off with a Grammy nomination for Best Dance Album for their debut album Settle.

10:20 p.m. – Arcade Fire are Coachella veterans, having headlined the festival twice in the last four years, so they’ll be bringing their A-game to the final night in the desert. We hope that includes some of the classic covers they’ve been playing on their latest tour, which has included songs by Prince, Blondie, Boyz II Men, Yeah Yeah Yeahs, and Stevie Wonder. Get your head-nodding and foot-tapping ready as the festival’s indie royalty—challenged only by the Neutral Milk Hotel reunion on the Outdoor stage—bring their Grammy-nominated tunes and their alter ego, the Reflektors, to the Coachella stage.