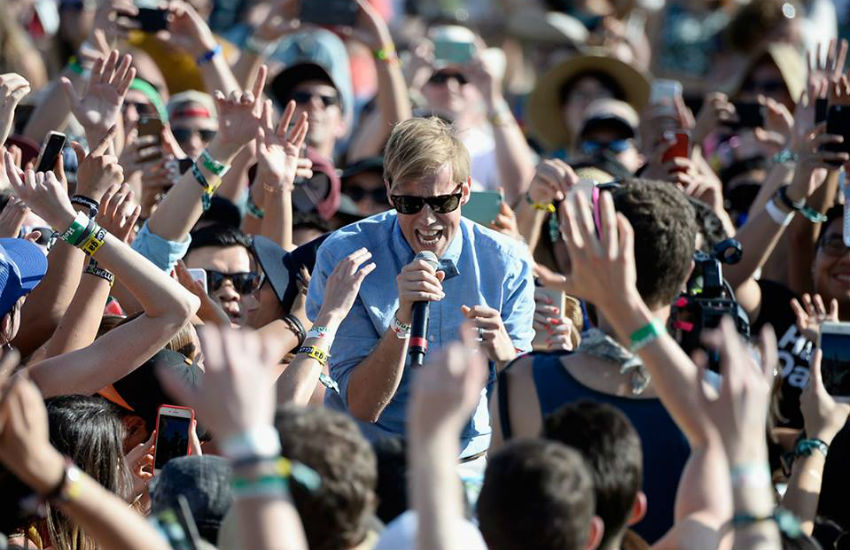 3:05 – Mac DeMarco’s full length albums 2 and 2014’s Salad Days sound like vinyls that have slightly warped in all the best places. His off-kilter, lo-fi sound is difficult to characterize, but live he blends deceptively simple, guitar-driven melodies with a healthy dose of raciness and humor. Get your weird on at the Outdoor Theatre.

4:30 – It’s the last day of the festival. If you’re still struggling to get an early start, you’re not alone. Let the synthpop of St. Lucia get your feet moving at the Coachella Stage and you’ll be energized for the home stretch.

5:35 – There aren’t many women on the bill this year (as many have noticed), but Sunday night tries to make up for that with a trio of heavy-hitters, starting with Jenny Lewis at the Outdoor Theatre. Her songwriting is getting better and better as her career goes on, and her live set brims with a breezy Californian charm.

6:05 – Don’t let their tiny print on the festival poster fool you: The Cribs are actually six albums deep into their career, and Johnny Marr of The Smiths formally joined them for a while. Initially compared to bands such as The Libertines, The Cribs came into their own and found success, more so in the UK than the USA. Catch this well-loved English indie rock band at the Gobi tent.

6:35 – If, somehow, his capacious catalog of heartbreakers doesn’t speak to you, Ryan Adams will still be a treat to watch at the Outdoor Theatre. A first-rate guitarist and lyricist, Adams often makes up a cheeky song for the crowd, and lately he adorns the stage with his beloved pinball machines. He’s one not to miss.

8:00 – For years, St. Vincent’s critically-adored music hasn’t been mainstream fare, but her latest, eponymous album changed that. What’s more, Annie Clark and her guitar chops will put on perhaps the most mesmerizing live performance you’ll see all weekend.

8:50 – Few artists embody the free spirit of Coachella quite like Florence Welch. Flo & Co. have been silent since 2011, but her dynamic voice will shatter that silence on the Coachella Stage as we prepare for Florence + The Machine’s How Big, How Blue, How Beautiful to be released in June. After Flo, shake off to Sahara at 9:00 to dance the night away with David Guetta.

10:15 – Drake has called himself the “Greatest Ever,” but we’ll let you be the judge. The Canadian actor/rapper storms the main stage as the last headliner of the weekend.