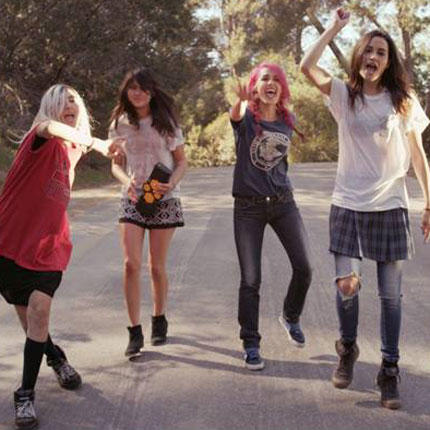 So, you survived Day One. Well done. As you sip that precious second cup of coffee, take a look at our picks for what should be a stellar Saturday in the desert.

12 p.m. – Did the sun come up too early? Room still spinning? To help you ease into a long day, check out L.A.-based music and art project, Young and Sick at the Mojave tent. Dutch founder Nick Van Hofweegan made his name designing album covers for Foster the People, Maroon 5, and Robin Thicke. His designs were also featured in Urban Outfitters. He makes his Coachella debut with the musical side of his project. Right after that, head to Gobi for soul singer Laura Mvula, who was nominated for two Brit Awards.

1:45 p.m. – Make your way over to the Outdoor Theater to catch L.A. natives Foxygen, a band that brings the psychedelic aesthetic of Woodstock to the Coachella generation. Bring your flower crowns for what will surely be a good time.

2:40 p.m. – Extend your psychedelic trip with Temples at Mojave. That’ll put you in the perfect spot to catch UK indie outfit Bombay Bicycle Club at 3:50 p.m. If you prefer rock of a more classic variety, Cage the Elephant will take the Main Stage at 3:15 p.m.

4:05 p.m. – Check out Scottish electro pop trio Chvrches at the Outdoor Theater. The band landed on several must-see lists last year and supported Depeche Mode on their Delta Machine tour. Fun fact: Singer Lauren Mayberry holds a law degree and a master’s in journalism, and prior to getting involved in music she was a freelance journalist. See? Dreams can come true.

5:05 p.m. – This hour is filled with good options; here’s how to do it. First, check in on Julian Casablancas, frontman of the Strokes, as he takes the Mojave stage, presumably to play material from his fantastic solo record Phrazes for the Young. He recently announced that he’ll be releasing a new album this year with the Voidz. We suspect Danielle Haim might make an appearance for old time’s sake, as she was a musician in Casablancas’s touring band, The Sick Six, while older sister Este attended UCLA and younger sister Alana finished high school.

5:20 p.m. – We’d ordinarily stick around to see Casablancas finish his set but catching the Head and the Heart on the Outdoor stage is an acceptable excuse for sneaking out. Too bad we can’t stay long here either. Kid Cudi takes the main stage from 5:45 to 6:30 p.m.

6:15 p.m. – If neither the folk-tinged tunes of the Head and the Heart or the hip-hop beats of Kid Cudi suits your fancy, Warpaint is an L.A. psych-rock quartet not to be missed. They’re on in Mojave right after Casablancas.

7:05 p.m. – Take some time to refuel while MGMT takes the main stage. We admit that the jury is out on the intensity of their live performance, but if the mind-bending, acid-laced vibe is your thing, you won’t be disappointed.

8:50 p.m. – Pixies! A last minute addition to the bill, they’ll be planying the Mojave Tent (sans Kim Deal)—and we’re elated.  Their first record in two decades, Indie Cindy, comes out April 26. If you miss them in the desert, they’ll play the Hollywood Bowl on Sept. 28.

9:10 p.m. – If you leave Mojave early, you can catch Brooklyn noise-pop duo Sleigh Bells in the Outdoor Theater. With huge overdriven guitars, frosty hooks, and bashing electronic percussion, their songs are hard to forget.

9:40 p.m. – Palm Desert natives Queens of the Stone Age will hold court on the Coachella Stage. Last year saw the rock stalwarts releasing Like Clockwork, one of the band’s best albums to date.

10:35 p.m. – Pharrell will get “Happy” at the Outdoor Theater. Whether or not his famous Mountie hat will make a guest appearance remains to be seen.

11:25 p.m./11:30 p.m. – Muse/Skrillex. This is a matter of personal preference. Our advice is to head to Muse because their lives shows are a thing of legend, but if you’re desperate for dubstep and drops, Skrillex is tops.