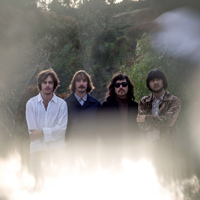 For the price of a car payment, a music fan can drive two hours, stand in a field with 75,000 of his or her closest friends, and watch Outkast perform a football field’s distance away. Or, for free (or for very little dough), you can stay in Los Angeles and check out one of these April residencies.

Mystic Braves at the Echo (April 7, 14, 21 and 28)
The Echo Park-based crew releases its second album, Desert Island, during its residency, before moving on to a May tour that will take it to the northeast (with dates in Brooklyn, Toronto and Philadelphia) and diagonally through the country to Arizona. The album’s lead single, “Born Without a Heart,” debuted on FADER magazine’s website.
Think: A garage rock band straight out of the psychedelic 1960s
Listen: via BandCamp
Cover: Free

Mosco Rosco at the Satellite (April 7, 14, 21 and 28)
The outfit formerly known as Harper Blynn has a new single, “I Wanna Love You,” featuring a face that’s familiar to alt-comedy fans: Reggie Watts, “bandleader” of IFC’s Comedy Bang! Bang!. The band was also a big part of singer-songwriter Sara Bareilles’ most recent album, co-writing a song and playing on several others.
Think: The danciest version of Talking Heads imaginable
Listen: via Soundcloud
Cover: Free

Aaron Embry at Hotel Café (April 1, 15 and 29)
Part of the extended Edward Sharpe and the Magnetic Zeroes family, Embry has also performed with Jane’s Addiction and produced for Avi Buffalo. His Hotel Café residency will, in part, celebrate the successful Kickstarter campaign to fund his next solo album.
Think: A classic Southern California troubadour, harmonica and all.
Listen: via Soundcloud
Cover: $10

Tommy and the High Pilots at Hotel Café (April 16, 23, 30 and May 7)
The Santa Barbara-based High Pilots recently returned from an opening stint with the Gin Blossoms on the East Coast and will return to the road with Toad the Wet Sprocket in May. Their latest EP, “Live at Studio Delux,” features covers of “This Must Be the Place (Naïve Melody)” by Talking Heads and “Stay” by Rihanna.
Think: Every late-‘90s fraternity house party
Listen: via Spotify
Cover: $10

Lawrence Rothman at Bootleg Bar (April 7, 14, 21 and 28)
After buzzy performances at SXSW (including one with the tastemakers at Mad Decent), Rothman settles in for a month of performances in Los Angeles. His recent stint on the road garnered attention from the Guardian and Wall Street Journal.
Think: The fragile baritone of Leonard Cohen over electro-R&B beats
Listen: via Spotify
Cover: Free

Banta at Silverlake Lounge (April 7, 14, 21 and 28)
The L.A. six-piece is set to play its first residency mere months after performing its first live show. The band already has a five-track E.P. up for streaming and has stayed busy as an opening act for residencies by David and Olivia and the Eagle Rock Gospel Singers.
Think: The post-“Lovefool” Cardigans
Listen: via Soundcloud
Cover: Free

The Cerny Brothers at The Mint (April 1, 15, 29 and May 13)
The Illinois-bred siblings Robert and Scott Cerny recorded their first E.P. of original music at the age of 13 then added Cody Fontes after relocating to Los Angeles. On April 15, the residency will find them playing all of Weezer’s “blue album.”
Think: Apple pie, baseball, and banjo
Listen: via Spotify
Cover: Free (April 1 and 15), $10 (April 29 and May 13)

Kiven at Hemingway’s Lounge (April 2, 9, 16, 23 and 30)
The L.A. foursome picks up speed in an already busy 2014. The band released its eponymous debut album in February and will embark on a tour in May that will take it to most of the mountain states Idaho where the group will play a show with Grouplove.
Think: British rock (sans accent) for the American alternative charts
Listen: via BandCamp
Cover: Free