Home Uncategorized You Show Me Yours: Tattoo Nation’s Corey Miller 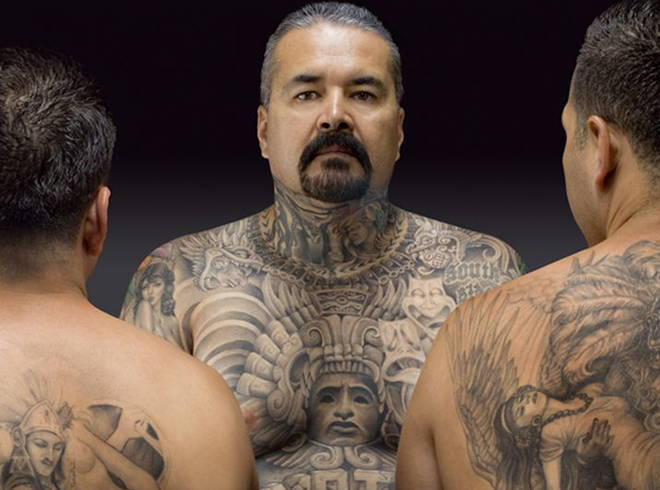 Once reserved for society’s more unseemly characters, tattoos have in the last two decades become acceptable for anyone above voting age. Peer around any weight room, college campus, or grocery store checkout line, and you’re bound to see ink ranging from meaningful memorials of loved ones to ill-advised tramp stamps. (Sometimes, they’re one and the same.)

The documentary Tattoo Nation celebrates the authentic roots of one particular style of body modification: the fine-line, black-and-grey artwork that grew out of California’s Chicano community. The film makes its week-long L.A. debut tonight at the Arclight Hollywood. Corey Miller, whose reality show L.A. Ink helped bring the painful artform to mainstream viewers, told us about the special privilege of narrating Eric Schwartz’s film, and what he gets out of tatting up the unwashed masses.

How did you get involved with the documentary? Did you know Eric Schwartz?
I didn’t. When they were filming the movie and they were delving into the tattoo world, [long-time tattoo legends] Charlie Cartwright and Ed Hardy asked if I was gonna be in there.

I’m a Southern California artist. I’ve been tattooing for, God, 30 years, 25 years in a shop, and I was lucky enough to work for Good Time Charlie. I worked for Jack Rudy in 1989 through 1991. They were the guys I had been looking for as my mentors for that fine line black ink work that you had never seen before.

So [the filmmakers] asked if they could film me and did a lot of extended interviews. It wasn’t until a ways down the road that they asked me if I would be interested in doing the narration. It meant that I wouldn’t be in the film as much, which I was fine with. I’ve been on TV plenty [while] tattooing.

What made this special, and how did it compare to your time on L.A. Ink?
To come from that old-school element where [tattooing] was kept very secret, the underbelly of society, and then to go into reality TV — for me that was a huge thing. In the beginning I kind of beat myself up over it, like is this the right thing to do? I ultimately made the right decision.

And now to see that some of those TV shows probably laid the groundwork for an actual motion picture to be made? It was a great affirmation that there were other people who were going to do what I had done. To be fractionally part of it, to know these people first-hand and to be close like family with them — it’s just ultimate.

You’ve been around for some time now — how have you seen the tattoo community in L.A. change?
It just started blossoming and growing. A lot of people like to look back at what has happened and rationalize it, and say there was an ultimate plan to it all. But I think the true people are just there doing what they do because that’s where their heart is. That’s what the movie’s kind of about. It wasn’t because of the TV shows, it wasn’t because of this and that. It just worked and people liked it. It’s our media and it happens with every trend. Tattooing is one of them.

Where’s the trend headed? What are some positive changes you see emerging?
I think the best thing to come out of it, and some may not agree, but there have never been so many amazing artists as there are now in tattooing. There’s a lot of crap out there, but there are a lot of really, really good tattooists coming.

On the same hand, when the public gets hold of anything, they tend to overdo it. But that’s a cycle that goes with everything. I do think it’s getting to that point where there’s so much of it that it’s a little bit over the top. It’ll settle down again.

And now [the tattoo parlor] has taken on this whole new feel, where I’m going to ultimately represent an idea that I have. It’s still got that rebellious side: “I don’t care what anybody thinks — this is something that I’m doing for me.”

It’s a lot more structured now. I have people coming to me, and they’re talking to me about this story in their lives before they even talk about a tattoo. I’ve heard tattoo artists resent that, and say, “Oh, I’m sick of people telling me their stories.” And I’m like, “Well dude, why don’t you go home and paint?” I love talking to people. I love horrible stories. I love good stories. I just love contrast in life. I can learn something off a bad story and I can learn something off a good one.

Whatever the story was at the time, what’s one tattoo you never want to do again?
I don’t know, probably like a $100 bill? I did it for Jesse James — it was hard. It was a pain in the ass.

I’m in a pretty decent situation. I can pick and choose my art. But I still hold myself to what made me good: A lot of times, I’ll just do what people ask me to do. That attitude was what got me where I am today, as a damn good artist. So I still try to do that and take up a difficult request.

But you know what, they’re all difficult. I don’t mind admitting it. You’ll be halfway through thinking, “Oh my God, am I gonna pull this off?” So many people think, “Oh, it’s just gonna flow out of me ‘cause I’m a master.” My own mind is my worst enemy. I beat myself up, think I suck. I think there’s so many better artists out there. It’s just like any type of work.

What else do you want people to know before they watch Tattoo Nation?
Just that I’m looking forward to seeing it as a fan as much as I am excited to have been a part of it. I know I didn’t create the film but to be able to narrate it, I truly am so grateful. If knowing my name gets people to go see it, they’re going to see the true story of why I’m a tattoo artist and why tattooing’s become what it is today. It’s that West Coast influence. I’m not just the poster boy for it. Those are my people. They’re my friends.