Home Art You May Not Know Their Names, but These 3 Artists Helped Shape... 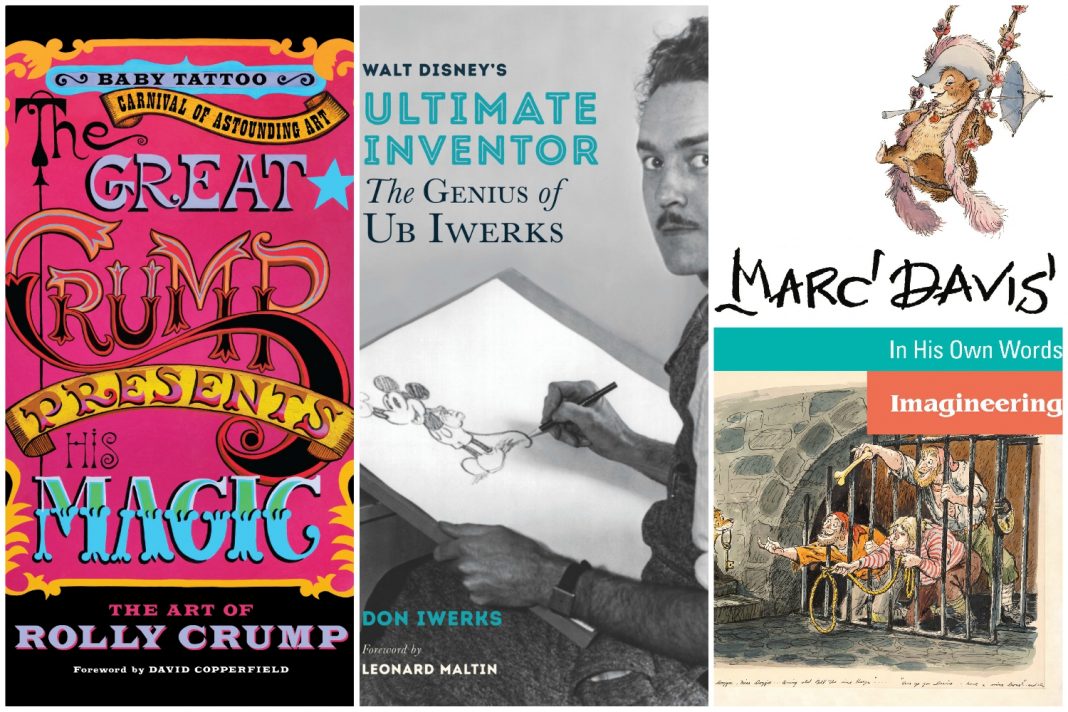 Walt Disney took in a lot of talented artists and exposed their work to the world. One of Walt’s many skills as a studio boss was finding out what his artists were good at and putting them on projects that suited their skills best. Three new books shine a spotlight on artists known for their work at Disney, while giving them a voice and showcasing their individual talents.

By Don Iwerks and Leonard Maltin

Film critic Leonard Maltin opens Walt Disney’s Ultimate Inventor: The Genius of Ub Iwerks with, “Anyone with even a passing knowledge of animation history knows the name Ub Iwerks. He is the man who almost single-handedly animated Walt Disney’s pioneering sound cartoons…” The rest of you know his work, but perhaps not his name.

Ub and Walt were lifelong friends who met in silent movie-era Kansas City, working together to create stop-motion animation for commercials in movie theaters. Iwerks souped up a movie camera borrowed from work and the duo set about making cartoons in Kansas City, and eventually Hollywood. The modified camera was the first of innumerable inventions from Iwerks that would change the way Disney made movies, bring added realism to attractions at Disneyland, and save their TV animation department.

Three generations of the Iwerks family have worked for the company. Ub’s son Don, author of this book, continues to consult with the company (and the Walt Disney Family Museum) at age 90, and granddaughter Leslie Iwerks is the Oscar- and Emmy-nominated documentary director and producer behind The Imagineering Story on Disney+.

Marc Davis in His Own Words: Imagineering the Disney Theme Parks

By Pete Docter and Christopher Merritt

Marc Davis started working for Walt Disney before the studio had ever made a feature film, and stayed there for more than 50 years helping to create classics from Snow White to the Haunted Mansion. Decades into his tenure, Walt asked him to pivot from animation and “take a look” at some attractions at Disneyland—and a new career was born.

Davis brought humor and emotion to wild animals, ghosts, and even a patch of cacti. “I have a whole building over there filled with animators,” Walt told Davis’s wife Alice. “But I only have one Renaissance man, and that’s Marc.”

The book is filled with the rarest of the rare in concept art, sketches, maquettes, unused gags, and great candid photos of Walt, Marc, and behind-the-scenes moments capturing the classic attractions coming together.

When he retired from the studio, Davis liked to mentor students at the California Institute of the Arts, including the book’s co-authors, Pixar director Pete Docter and his friend, Imagineer Christopher Merritt. Thank goodness Merritt brought along a tape recorder on the many visits he made to Davis’s Silver Lake home. Much of the book is direct quotes from Davis (who died in 2000), and a cavalcade of legendary Imagineers from the early years of the park.

At 750 pages and ten-and-a-half pounds, it’s quite a commitment. Merritt and Docter worked on the book for years, and their magnificent obsession is unequaled. They’ve created an invaluable resource for historians, art students, and folks like me who just love Disneyland.

The Great Crump Presents His Magic: The Art of Rolly Crump

The only living artist in today’s roundup is Disney legend Rolly Crump, the hepcat be-bopper who started off in animation, was recruited by Walt to move to Imagineering, but spent his evenings crafting bawdy art for beatnik-era jazz clubs and coffee houses.

Crump sculpted tikis for the Enchanted Tiki Room and adapted Mary Blair’s paintings into the magnificent kinetic façade for it’s a small world. He dreamed up monsters and mayhem for a “Museum of the Weird” that never happened, even though some of his ideas lingered around long enough to find their way into the Haunted Mansion.

His baroque designs with muffled messages like “Fly Heroin Airlines” were charmingly set in a sea of Victorian frippery that made even raunchy pieces absolutely charming. His style is perfect for toys, including a flock of Japanese-made creatures with pop-up messages emerging from their heads.

Full disclosure, your columnist wrote the biographical essay on the artist for this book, (and this other book) which was adapted from a career retrospective at the Oceanside Museum of Art in 2017.  Crump, 90, retired near the seaside community in the 1990s.

The book spans a lifetime, from his youthful magic act and stagecraft, to his work at Disney, and his offbeat personal artworks of geisha girls, Dia de Los Muertos figures, and jazz-age women. The paintings and sculptures gathered for the museum show were auctioned off when the show ended, leaving this book (and Disneyland) as the repository for a lifetime of whimsical art.

RELATED: This New Visual History Will Make You Fall in Love With Disneyland All Over Again