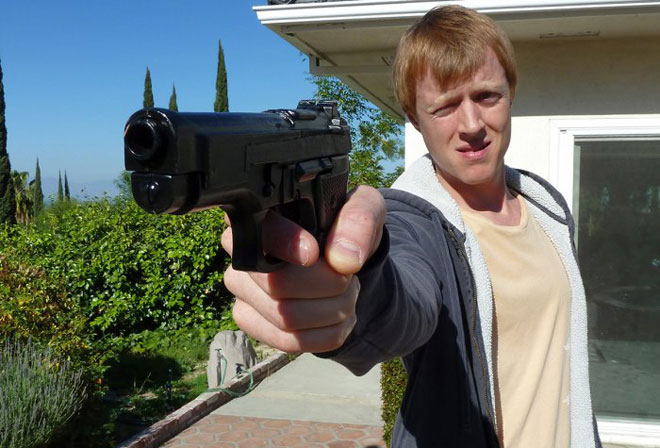 Los Angeles: What made you want to make a pornographic thriller?

Robert Nathan: The project started with my friend Lukas [Kendall], who I’ve known for about fifteen years, saying, “I want you to look at this Web site,” and “Don’t you think there’s a story here?” It was a Web site that invited its subscribers to make submissions in a contest to be able to sleep with a porn star. I thought the most fascinating thing about it was that I knew that pornography had changed a lot over the last twenty years. The movie that made everybody pay attention was Boogie Nights; that’s when it was a seedy world filled with seedy people who had had difficult, horrible lives. But when I saw this I realized, “Oh, that’s all gone.” There’s a whole era that was depicted in Boogie Nights that is not really there anymore. It’s become a much more mainstream, commercial business.

LA: What was most alluring about this fan perk? In the film it’s the lynchpin that holds the narrative together.

RN: It’s a classic piece of almost mythic storytelling when an outsider comes into a family and the family changes; we’ve seen that onstage eight million times from Shakespeare to Arthur Miller. It’s one of the great emotional engines of all time: When a world is disrupted by the outsider everybody changes and what can happen is a free for all.

RN: I’ve written about a lot of the same things from the very beginning of my career in journalism, television and fiction, which is trying to break down the notions that we’re so separate. The ease with which we forget our common humanity and everybody who we would distance ourselves from, when you get close to them, are more like us. When we started to think about what we could do with the movie, I said, “Let’s do these people like this woman I just met. I asked her, ‘Does it bother your husband to see you having sex with other men?’ And she said—like we were talking about going to the grocery store—’Well, we’ve been to therapy. We’ve worked it out. It’s difficult, of course, but I make a great deal of money that I wouldn’t make in any other way. We have a very good lifestyle, we started two other businesses, and I’m pretty sure now I have enough money to put my kids through college.'” None of the clichés applied. She was not an abused child or a drug addict. I said “Did you get into porn in a desperate way?” She said, “No, I actually made a conscious decision to stop what I was doing, which was not making a very good living, and do something in which I could make a much better living because I wanted a better life for my kids.”

LA: How did you shape her worldview into a coherent, meaningful story?

RN: The journalist in me said, “If you’re going to make this real and you’re not gonna go for every cliché about damaged people being manipulated by evil people, tell the story of what the audience doesn’t expect but what is true: They’re just ordinary people making a living and they’re going to the same set every morning like I go to the set every morning.”

LA: What’s at the center, thematically, of this story?

RN: The ultimate statement about sex in American culture is that if you want to get an R or an NC-17 rating for a movie, it has to have lots of sex in it. In Europe, sex is completely ignored and violence will get you into much more trouble with movie audiences. You don’t see a lot of European movies that are violent, gory shoot-’em-ups. The big difference in American culture and world culture is that we have a particularly perverted relationship with sexuality. We wouldn’t have this zillion-dollar pornography industry unless a lot of people say it’s a terrible thing. We’re hypocrites. [We] buy the product every day. You look at it like, “Oh, how disgusting. How distasteful. The people who make it are awful.” Then why are you paying $19.99 a month fee for that pornography service?

LA: Why take the found-footage approach for a movie like this?

RN: Why would we make it as a conventional drama when it is the story of a Web site shooting something for its own Web site? Why not tell it from the point of view of the guy who owns the Web site? Because how he makes it is part of who he is. The device isn’t a device; it’s a way of telling us who the characters are.

LA: Are you worried people might not take it seriously because there have been so many found-footage flops?

LA: What was the biggest obstacle in filming?

RN: Because it was about pornography, I thought mainstream actors would be very cautious about this material. I was afraid that we wouldn’t get good enough actors. These are such difficult parts; they look easy on the page, but they require the best characters actors available and it required a leading lady who was a real leading lady. Funny, sexy, and beautiful is not easy to come by.

When Betsy Rue walked in, I didn’t know her work but she said, “I’m famous for the most gratuitous nude scene in American film [My Bloody Valentine], and everybody knows me for playing that long scene naked.” She read for the part and she was so funny, we were literally on the floor laughing.

LA: What would be a triumph for you with regard to this project?

RN: When [the audience] walks out of the theater, if on the way home they’re thinking that they bear a human connection to those people. We’re all struggling in life with the same things, just in different ways.