Home Uncategorized Yes, You Can: Kayak the L.A. River 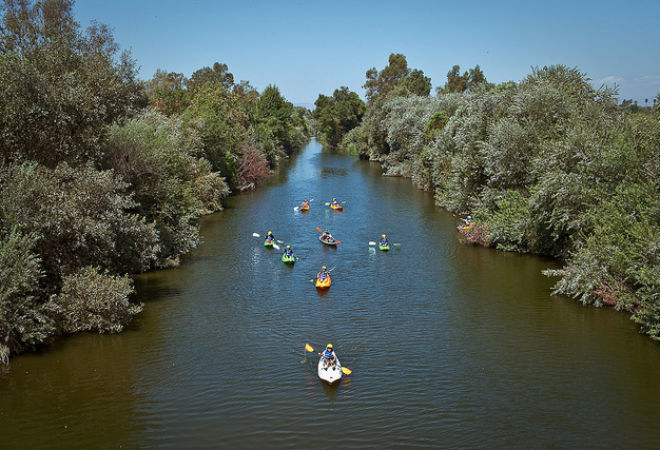 Put on your lifejackets, Angelenos. It’s time to go kayaking. If you’re familiar with the city’s natural splendors (or the drag race scene in Grease) you know that Los Angeles has a river—not that you can see much of the water. Most of the 51-mile L.A. River, which stretches from Canoga Park to Long Beach, was lined with concrete in the late 1930s to control flooding and was then closed to the public. That hasn’t stopped intrepid urbanites from illegally riding its rapids. (Okay, they aren’t really rapids but we enjoy a bit of hyperbole.)

Plenty of groups have pushed the city—and its residents—to reconsider how we think about the river. Last year, the city briefly opened a 2.5-mile stretch in Elysian Valley for public recreation, finally allowing people to bird watch, fish, and freely roam the area. From Memorial Day to Labor Day, visitors could book a guided tour and explore the river via kayak. Whether you were a pro or newbie, you simply had to get a permit when kayaking with an organized group.

The 2013 test run proved so successful that this year, the program has returned—and it’s bigger and better. In addition to kayaking through Elysian Valley, you can now glide down Sepulveda Basin, a shorter and calmer stretch better suited for the casual paddler. Friends of the Los Angeles River (FoLAR) and LA River Kayak Safari will together host several events and tours that will give participants a glimpse of the local landmark.

Tickets went on sale on May 25 and, according to FoLAR’s co-founder Steven Appleton, more than 50% of last year’s business booked up in the first 18 hours.

Here’s the info you need to ride the L.A. River: