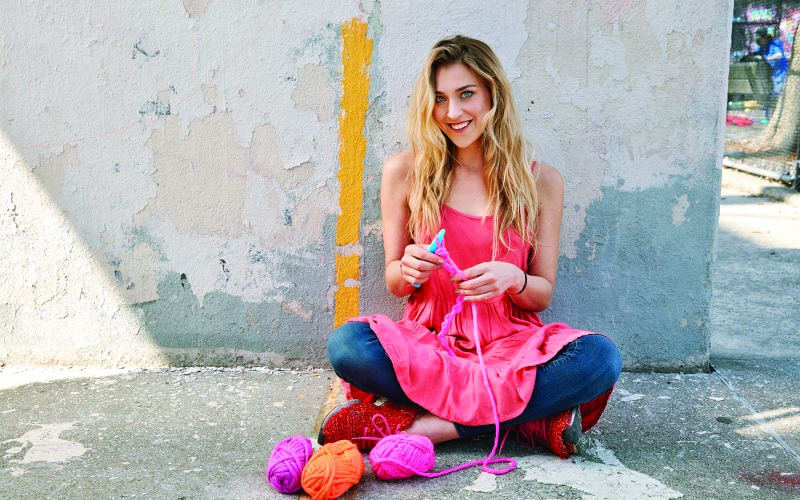 Yarn bombing, that form of guerrilla street art your grandma would be most likely to partake in, was still a nascent thing in 2013 when crochet queen London Kaye wrapped a crocheted scarf around the tree outside her Brooklyn, New York, apartment. “I was working at Apple when a customer came in with a cool crocheted bag,” she says. “I thought OMG, you can do more than just make scarves and hats? I hung up my scarf as soon as I got home.” Nobody took it down, but those who passed by smiled.

And if you’ve passed by her 15-by-15 foot rainbow on Melrose and Laurel, you’ve likely smiled too. Kaye has a knack for color, a playful wit (some of her pieces are clever plays on common phrases like “love sick”), and an eye for artistry. Whether she’s turning Santa’s sleigh into an Uber/Lyft vehicle or creating a sidewalk koi pond spilling out of a water pipe, all of Kaye’s installations inspire a double-take and a few selfies.

Kaye, who has since created crochet content for the Gap, Valentino, Starbucks, and Miller Lite (in which she yarn bombed an entire 50-by-25 foot billboard in Times Square), started crocheting at 13, selling scarves to her dance studio classmates. By 16, she’d sold so many, she bought her first car. “I always knew you could make money with crochet,” she says. “I was just trying to figure out how.”

The Malibu native moved to New York to attend NYU on a full ballet scholarship. She crocheted on the side “for fun” while working at Apple and making lists of what her true passions were. Crochet was always at the top of the list.

After the successful scarf-on-the-tree experiment, Kaye challenged herself to put 30 pieces out in the world in 30 days. While the commercial work picked up, Kaye continued to leave public love letters here and there. For Valentine’s Day one year, she left a thousand crocheted hearts in Union Square. Another year, she covered the subway poles with hearts. “A heart can’t help but make people smile,” she says.

Besides the rainbow piece on Melrose, Kaye will be unveiling two brand new works in Los Angeles. The first will be a collection of crochet flowers for the mural space outside Alfred Coffee in Silver Lake that will be revealed Friday, February 9. The second, her Valentine to the city, is a ten-by-ten foot heart that’ll be hung in Pershing Square. The installation will be made of yarn from Kaye’s newly launched collaboration with Lion Brand, the London Kaye Collection, and will go up on Valentine’s Day.

“I made my mark in New York,” she says. “I’m just excited to see what I’ll be inspired to create here.”