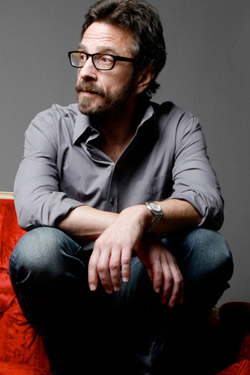 There’s improv, and then there’s random onstage riffing that audience members have paid, albeit only five bucks, to see. I can’t imagine there was much preparation for WTF with Marc Maron, a podcast taped at UCB last Friday. Episodes of WTF go up every few days since last summer, featuring celebrity guests like Ben Stiller and Robin Williams. Maron, the 46-year-old host of the show and a regular on Late Night with Conan O’ Brien, opened by reading aloud notes he’d received from people detailing their “WTF moments”; one girl dreamt that her face was on the front of a macaroni box, some guy defecated in his pants and graciously included all the relevant details.

Comedians Matt Besser (a UCB founding member), Ed Crasnick, Eddie Pepitone and Jim Earl chatted with Maron throughout the show, but the joke of the night was that Craig Robinson, host of Last Comic Standing and the only big name scheduled for the podcast, didn’t show. “What the f–k is with Craig Robinson blowin’ us off,” Maron kept saying, clearly vexed. The host explained over and over that he had “reconfirmed” with Robinson, as if it mattered. At dull moments, and there were many, Maron would jest, “Craig Robinson. Paging Craig Robinson.”

It’s not as if WTF wasn’t entertaining, though. Outlandish musings by Maron and Besser about the repercussions of giving birth sideways were particularly memorable. Maron imagined what it might be like for the kid as a high schooler taunted by his peers with insults like “Hey, do you catch the sideways bus to school?”

An uncomfortable conversation about the mentally disabled quickly evolved from there, and Besser wondered whether the word “retard” works like the “n-word”, which is to say, whether the term suddenly becomes acceptable if used on the inside. “Yo retards!” or “Wassup my retard?” were some of the manifestations he conjured. Before long though, the energy waned, and the guest comics who did show up didn’t do much to bring it back. “This show has gone off the tracks,” Maron admitted as he tossed free giveaways at the crowd. Craig Robinson. Paging Craig Robinson.

Maybe Robinson had a good reason not to show up. Or maybe, when you become a famous enough comedian, you treat UCB like it’s your mother’s kitchen. Yeah, I’ll be there, you say in a non-committal, haphazard way. The only difference is that your mom doesn’t advertise your name in the event calendar online.

Listen to last Friday’s event and other WTF episodes at WTFPod.com.