Home Art Writing on the Wall: Global Street Art from L.A. to Kiev 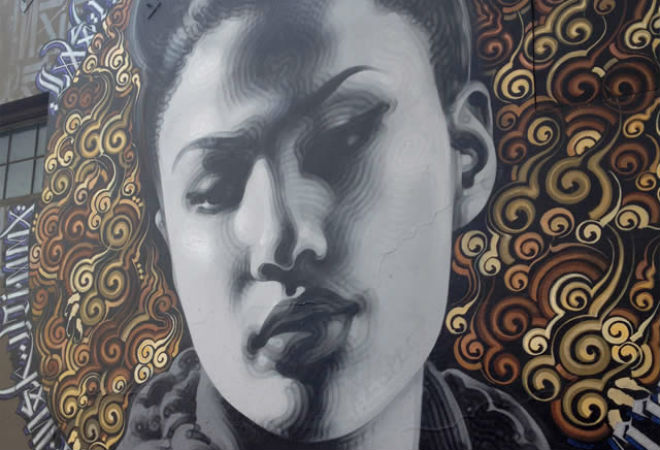 Whether it’s a tag on the side of a bus or a giant image of Barack Obama emblazoned with the word “Hope,” the idea that graffiti is a political act permeates The World Atlas of Street Art and Graffiti, Rafael Schacter’s colossal new tome on street art.

Featuring 113 artists from 25 different countries, the book offers a comprehensive overview of contemporary practitioners of “Independent Public Art,” a term coined by Spanish urban art theorist Javier Abarca. The criteria for selection? Artists must work “outside in the unrestricted, communal areas of the environment,” no gallery pieces or bathroom stall doodles allowed (the latter is known as latrinalia, in case you were wondering). The book is a tour de force that includes everything from gigantic murals in Kiev to daredevil tags on the Sydney Opera House.

Los Angeles plays no small role in the evolution of graffiti and street art; the book’s front cover features El Mac’s La Reina de Thaitown. As Schacter explains in his introduction, L.A.’s graffiti scene was heavily influenced by, and in some cases a direct descendant of, the Chicano community-based mural movement of the late 1960s. Contemporary L.A. artists who have found their way into the book include Augustine Kofie, whose geometric shapes give his work a layer of mathematical abstraction, El Mac, known for his immensely detailed, almost pulsating portraits, and Shepard Fairey, one of the most famous street artists in the world.

With the Los Angeles City Council’s recent decision to overturn a 2002 ban on the creation of murals on private properties, there’s never been a better excuse to check out Schacter’s atlas, get out on the streets, and experience the original art form of Los Angeles. Here are five awesome L.A. pieces by artists who didn’t make the book.